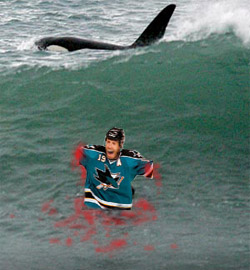 The Enemy: Fear The Fin, Battle of California

Update: It looks like Baumgartner will be replacing Sami Salo tonight. May as well. Give Sami a maintenance day.

The Canucks are in San Jose to play their final road game of the regular season before returning home to play Calgary in the season finale. Once again the Canucks are playing a game where no matter what the outcome, they are not moving anywhere in the standings. It's the Sharks who may have that extra motivation, as they were bounced from their top seed in the West by the Blackhawks on Wednesday night.

What one can hope for from the Canucks is a win to even the season series with the bad ass Sharks for mental advantage, and for pride's sake. They also need to get their defensive game in order....still. Maybe playing in front of Andrew Raycroft will do just that. At the same time, the freaky injury bug hitting the team lately needs to STOP!

Matt Pettinger and Nolan Baumgartner will also step in for Vancouver. Matt Pettinger's role as a checking center fills the gap left by Ryan Johnson. He offers more at that spot than Rick Rypien, Darcy Hordichuk and Tanner Glass will. Those latter 3 are rumored to be sitting this game out. It's projected that Pettinger will center Steve Bernier and Jannik Hansen. There's a 4th line of speed and grit for ya! I'm in! It's not the biggest brute line but it will do.

Canucks.com was also reporting on Wednesday that Michael Grabner has been dropped to Line 3 with Kyle Wellwood and Mason Raymond, while Mikael Samuelsson was promoted to line 2 with Ryan Kesler and Pavol Demitra. At least, that's the lines they saw in practice. Grabner was demoted to line 3 during the loss to Colorado. He ended up playing 12:37 with no points and no shots. This coming off a hat trick performance the game before.

Some teams are resting their star players. The Canucks are only (more or less) doing so with Christian Ehrhoff. The coaching staff has made it clear the Sedins will continue to play so Hank has a chance to win the Art Ross trophy. Both Alexander Ovechkin and Henrik have 2 games remaining. Hank has 107 points to Ovechkin's 106. Washington plays Friday and Sunday to finish off their season.

-Henrik has 1 goal and 5 assists in his last 5 games played.

Yeah, it's going to be close. We may have to watch the Caps game on Sunday with our fingers crossed.

By the way, no word on who Nolan Baumgartner is replacing against San Jose. It is most likely Andrew Alberts, our f*cking hero. Shane O'Brien had taken a Sami Salo slapshot off his heel at practice on Wednesday but should be good to go against SJ.

-San Jose has only 3 players in the 20 goal club this season (Marleau, Heatley and Pavelski.) 3 players (Thornton, Setoguchi and Clowe have 19.)

-Not even Sharks pundits want to face Detroit in round 1.