To Spoil Or Not To Spoil...Canucks-Avalanche Preview

Share All sharing options for: To Spoil Or Not To Spoil...Canucks-Avalanche Preview 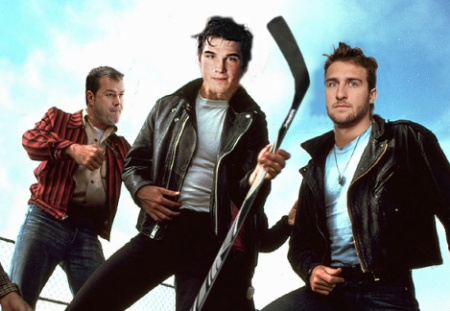 All praises to Shifty for the Photochop!

The Canucks had finally played a solid game in front of Roberto Luongo on Sunday night against the Wild...until Minnesota pulled their goaltender for the extra attacker. A 3-1 Canucks score was erased in seconds. Call it over confidence, call it nonchalance, I don't care what we call it, I don't want to see that happen again! Sure, a win is a win, but this team needs to tighten up for a full 60 minutes in preparation for the playoffs. Hey, if Diane Sawyer can do it so can Vancouver.

Tightening up defensively and consistently doing so, taking less penalties, and obviously matching Colorado's intensity and speed will be keys to this game.

A big "welcome back" to Shane O'Brien and Steve Bernier. Those 2 are going to bring some grit and edge to the Canucks and it is most welcomed. With Ehrhoff's absence, somebody is going to have to chew up some of that ice time (preferably not Salo, who already played over 26:00 last game). OB could be stepping into a minimal 21:00 gig right off the bat.

Colorado has lost Peter Mueller for the time being due to a concussion suffered at the hands of Rob Blake. Mueller had 9 goals and 11 assists in 15 games since joining the Avs at the trade deadline.

Colorado has 2 wins and 7 losses in their last 9 games. They have surrendered 4 or more goals in 5 of their last 8 games. Is Craig Anderson tiring? More intriguing is that the Canucks have beaten the Avs 4 straight times, outscoring them 22-8 in the process. No, we are not good to Anderson at all.

Roberto Luongo is gunning for his 40th win tonight. He has only done that once in his career (2006-07, playing with Jan Bulis and a bunch of pluggers).

Are the Canucks in the mood to spoil the Avalanche's playoff hopes? Calgary and San Jose's game will start at 6:30 PST so you know Colorado will be watching that closely. Like I've said before, the Canucks are mostly playing to get their shit together before the playoffs start. They are not going to catch Chicago. The Avs are going to come at Vancouver with hellacious fury. I want to see the Canucks win in regulation so that the Avs-Flames race becomes that much more intense. We do play the Flames on Saturday night after all. I'd like to see that be the "win or golf" game for the Flames.