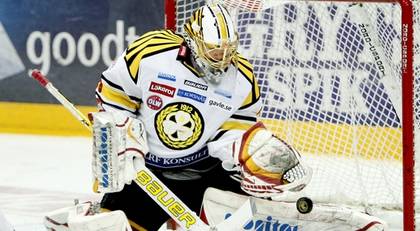 No pressure Lui, not just yet.

G/t to VanCitySports who reported this morning that Vancouver has signed Eddie Lack, a 6'4" 22-year-old who went undrafted and played for Brynäs of the SEL this season (fun with Google Translation is here).

Eliteprospects.com - who also has his career stats - describes him as:

A hybrid and not your traditional butterfly goaltender. Läck ia [sic] a tall and lanky player that covers the net very well. Despite his large frame, he has rather quick reflexes and good agility. Could become stronger, though.

Lack gives the team a fifth netminder prospect, along with Joe Cannata, Morgan Clark, Lukas Mensator and that Cory Schneider fellow. You could view this move as shoring up Manitoba's ranks should Schneider either be slated for a trade or Luongo's back up next year. Or maybe he'll fly over to Vancouver real quick and learn to play defense?