Canucks' First Round Opponent Not Even Close To Being Decided

Share All sharing options for: Canucks' First Round Opponent Not Even Close To Being Decided 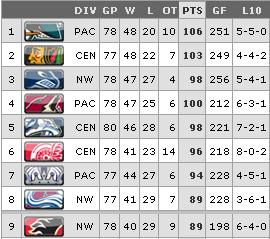 Are these good times or what? There are no guarantees on who the Canucks will play in round 1 of the playoffs until perhaps the last day of the regular season. It's about fair to assume the Canucks will finish in 3rd. With only 4 games left, and the maximum points that can be attained at 8, it's asking a lot from Chicago to not get more than 3 points in their final 5 games in order for Van to move into 2nd. The Canucks only need 1 more point to clinch the Northwest Division title.

So the "race" for who claims 6th spot ensues, and it's a beauty. Sure, it looks like it could be Detroit, but they have 2 games in hand on the Preds even though they lost to them this afternoon. The Kings can (temporarily) claim 6th spot tonight if they beat the Ducks. Phoenix play Edmonton tonight and need to win to solidify their chances at finishing in the 4th seed. Never trust those Spoilers though! A look at who these teams play down the final stretch after the jump.

San Jose: Colorado, Calgary, Vancouver and Phoenix (2 at home, 2 on the road)

Colorado and Calgary are hardly options to finish as high as 6th. They pretty much have to win all their remaining games and expect the Kings, Wings or Preds to lose almost all their games. However, the Calgary-Colorado race for the final playoff spot is ON.

My projection? Canucks play Nashville in round 1. Not too hard to pick that. (Oh, and Calgary misses the playoffs).

Enjoy your Saturday! Consider this an open thread for a crucial day of hockey!