...and now a word from Nashville

Share All sharing options for: ...and now a word from Nashville 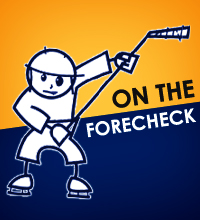 We're busy putting together a closer look at the Hawks roster, but before that we grabbed a quick word with Dirk Hoag, he of OnTheForecheck.com fame since he just spent the last few weeks staring at Chicago. The Preds were within seconds of making it a 3-2 series in their favor when the Hawks tied it up and Hossa scored shortly after leaving the box in game five (something or other about a boarding call). Preds lost control of the series and wham bam here we are.

I asked Dirk for his quick take on what he thought about the upcoming series. His response after the jump.

This should be an exciting series, because both teams are loaded up front, but with questions on the blueline. For Chicago, having Campbell back (even if not 100%) is huge, not just because of what he brings, but because it allows Dustin Byfuglien to go back to playing wing, where he can wreak havoc in front of the Vancouver net. During the regular season, he gave Nashville fits in that role, whereas in their playoff series he was a liability on defense.

Antti Niemi is reasonably solid in goal for Chicago, but does leaves rebounds available if the Canuck forwards can work their way in there to get them.

Their forwards can bring a steady stream of pressure, particularly when they shorten the bench. Marian Hossa and Patrick Kane, in particular, bring entirely different looks since Hossa likes to use his strength to drive the net, while Kane whirls around at top speed.

Sounds about right and it makes this piece of news even less terribly shocking. Vancouver's blueline - albeit quicker and more offensive than last season - had more questions going in than Chicago.

I followed up by asking what Nashville did right against Chicago and what success, if any, Vancouver could perhaps emulate:

Where Nashville succeeded was in (mostly) keeping the big stars for Chicago in check, thanks in large part to the work of David Legwand and Joel Ward. Jonathan Toews and Marian Hossa weren't anywhere near
as big a factor as we would have feared going into the series.

Kesler, Burrows, Bernier et al should be on notice. It helps that RJ is back skating with the team and the Sedins were out killing penalties at the end of the Kings series so they got their feet wet with a little defensive schooling. As Dirk said, they're going to come in waves and Vancouver should be downright militant in defensive zone coverage but at least this year they have enough speed to make them pay for it if neutral zone errors can be pounced on. Bieksa, SOB, Edler? Get ready for the (disciplined) challenge ahead.

Cheers to Dirk for his help and some food for thought before we get into the weeds later this week.