Share All sharing options for: Remedy the PK Or Die! Canucks-Kings Game 4 Preview

Update (3:32 PST): C'mon father time, hurry up! Just FYI...know when the last time was that the Canucks lost 3 games in a row sans a shootout loss? November 12, 2009. The only other time was their first 3 games of the season. There's a positive pill to chew on!

Update: According to Shane O'Brien he talks to Colin Campbell more than he talks to his mom. OB was fined $2500 for shooting a puck at Jeff Halpern in warmup prior to game 3. Vigneault was fined $1000 and the team an undisclosed amount. More on this at TSN's Ice Chips. Also, Aaron Rome out, Nolan Baumgartner in for Vancouver tonight.

No need to panic. Not yet. Not until the Kings get their first power play of the game. Then we'll see if the Canucks have remedied the issues that not only haunts but is killing them in this series. More after the jump (off a cliff)...

I'm just going to give you snapshots of the 3 Kings power play goals from Game 3, since Vancouver PK is giving me a damned bleeding ulcer... 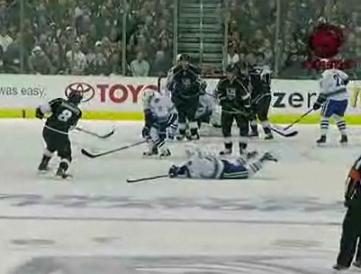 Good god, let's just allow the Kings make a wall in front of Luongo and pray the shot doesn't get through! Well Doughty's shot did get through and it went in the net. Who's that Canuck "trying" to block the shot? You're part of the wall, buddy. Stop the puck or get the fuck out of the way! 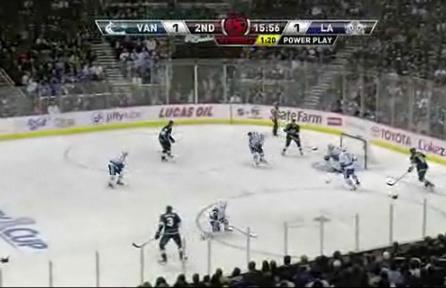 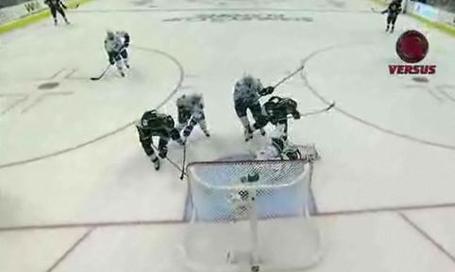 Now it's 2 on 2 in front of Luongo. The 3rd King is just out of the left side of the pic. Shot just got through from the point, which Luongo stopped, but Handzus, who is shittingly being covered by Burrows, gets the tap in. That's Edler giving the other King a crosscheck so he doesn't get at it. Sami Salo is in this picture. Yes he is. Guess where? He's behind the Versus symbol. From there he made a feeble attempt to block a point shot and the puck got through. May as well have done the flamingo, Sami. Meanwhile, Kesler was skating back and forth, from point man to point man laying his body on the line trying to block the shots.

Watch the highlights here to see what I mean, and make your own conclusions.

I don't really have much of an answer to the PK problem. Actually, I have a couple of ideas.

-stop running around like a bunch of headless chickens! Find composure!

-form a box in front of Luongo. Doughty and Johnson are leading the Kings in scoring, yes, but let them take shots from the point but don't let them get through. Keep them to the outside. Yeah you're gonna block a fuckload of shots and it's gonna hurt. So what? Do you wanna win or not? Jesus, if half these guys had half the balls that Ryan Johnson has... Pressuring the points isn't working. Or maybe the Canucks aren't doing a good job at it. Voice your opinion in the comments section.

Welcome to the biggest game of the Canucks' season. Drink accordingly.