Share All sharing options for: A Bit of Squid - April 20th

Yes, last night's game was pathetic.  It's obvious our penalty kill needs a complete overhaul.  And now, we have to win 3 of the last 4 games.  Come on Canucks, I believe in you.  If they could do it against the Flames in 1994, you can do it here.

In other news, I have decided to move one of the links up to above the jump so that I can be the first to offer my congratulations to Selke nominee Ryan Kesler.  Yes, that's right, they announced it just minutes ago:  this year's nominees for the Selke are Kesler, Pavel Datsyuk, and Jordan Staal.  As most of us know, Kesler and Datsyuk were both nominees last year, with Datsyuk winning it a 2nd season in a row.  Congrats on the repeat nomination, Ryan!  (And just as I post the Squid, Yankee posts a full congratulatory story about it and tries to steal my thunder on the breaking news....)

Rest of the links after the jump.

Throw any more links you find in the comments.  And here's my favourite Doan Face: 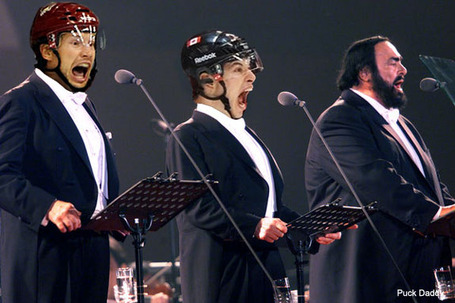