A frame-by-frame breakdown of Luongo's brilliant save

Share All sharing options for: A frame-by-frame breakdown of Luongo's brilliant save

Roberto Luongo's miraculous save in OT last night is the play of the playoffs so far. Yankee Canucks posted a video of the save on this blog last night, and those of us in Canada may have seen it featured as the Highlight of the Night on TSN's SportCentre. It will no doubt be talked about for some time around the NHL, especially if the Canucks make a deep playoff run.

I decided to take a closer look at the save, which it turns out is notable for more reasons than simply Luongo's brilliance. After the jump, I breakdown the save by looking at some of its key components and come to a surprising conclusion: while Luongo was remarkable in making the save, the Canucks are lucky that they did not lose Game 1 on that sequence. Poor defensive coverage by the Canucks set up the play, while a weak shot followed by a shocking lapse in concentration from a veteran player prevented the Kings from capturing the opening game of the series.

If the Canucks eek out a series win over the Kings, Luongo's save will surely be looked back upon as one of the key moments in the series. As the following analysis demonstrates, a remarkable confluence of factors allowed the save to happen.

I have broken down the sequence into 11 frames, which I think allow for an understanding of how the play unfolded. As the puck is sometimes hard to see, I have circled it in red. This entire sequence happens in about 4 seconds, which says something about the speed at which NHL players, especially goalies, must react to very quickly changing circumstances. 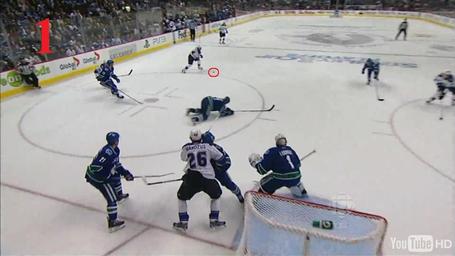 Here we see Ryan Smyth winding up for the shot, while a Canucks player (I think it's Matt Pettinger but I'm not certain) attempts a horribly positioned and mistimed block on all-fours. You can clearly see that Jack Johnson has read the play, snuck in from the point and beaten his man to the net. Johnson's check is none other than OT hero Mikael Samuelsson - fortunately his goalie bailed him out, or we might be ragging on Samuelsson today instead of celebrating him.

Also notable in this frame is that Kevin Bieksa has great position on Michael Handzus, effectively boxing him out from Luongo's crease. 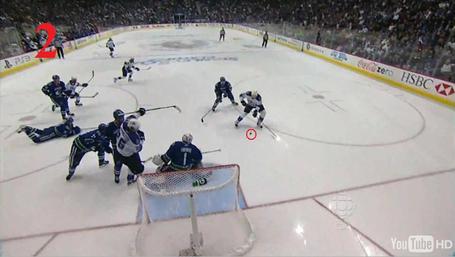 This is a shot of the rebound from Luongo's stop on Smyth. As already noted, Johnson has beaten Samuelsson to the net. Luongo is not set, having just been squared up to Smyth's shot, and is attempting to get across to stop Johnson. Fortunately for the Canucks, Johnson is a left-handed shot and has to shoot across his body on this play, likely affecting his ability to get a good shot away.

Note that Bieksa has failed to contain Handzus, who has now moved into Luongo's crease. It is not clear why Handzus' stick is in the air, but perhaps it is a consequence of fighting through Bieksa to establish position. However, it is a very important factor, as will be seen shortly. 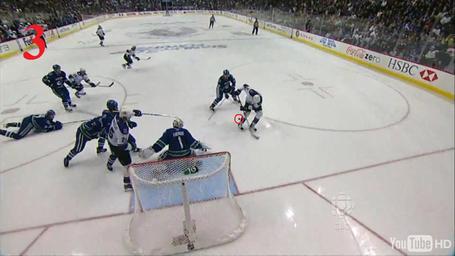 This frame is immediately after Johnson shoots the puck. Given that the puck is taking a strange angle and that Johnson's body position is less than ideal for getting a good shot, we can surmise that he definitely did not get all of the shot. Johnson clearly got ahead of the puck, and had to turn himself to angle the shot on goal. Given Luongo's positioning here, it seems clear that a solid shot from Johnson would have ended the game. 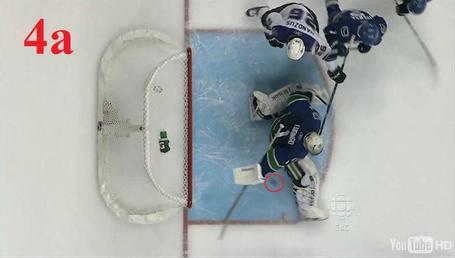 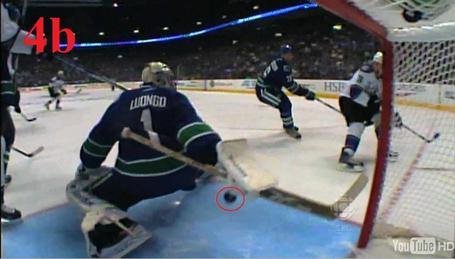 The way in which the puck slowly trickled through Luongo suggests that he got a piece of it, and these two frames support this assertion. In Frame 4a we see the puck heading under Luongo blocker arm, while the view from the net-cam in Frame 4b indicates that the puck may have clipped the underside of Luongo's blocker.  This partial save, combined with the weakness of Johnson's shots, likely reduced the puck's momentum significantly and thus gave Luongo the precious milliseconds he needed to turn his body and sweep the puck off the goal-line. 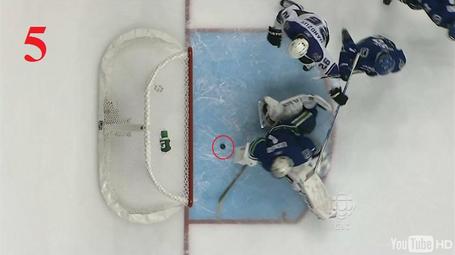 This shot gives a good indication of the athleticism Luongo displayed in making this save. You can see that his body is following his head, which is turning backward to spot the puck. Luongo's upper body and right leg are already swinging around, dragging the left leg with them. 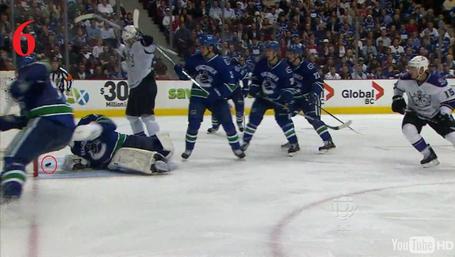 Is Handzus celebrating? It sure looks that way. Yes, Bieksa appears to have lifted his stick (which is inexcusable, as Handzus' positioning essentially guarantees that he could get his stick down if he tried). However, Handzus is also raising his non-stick hand, seemingly in celebration. I honestly think that Handzus thought Johnson's shot was going in, and instead of anticipating a rebound or a loose puck in the crease, threw his arms in the air to celebrate. 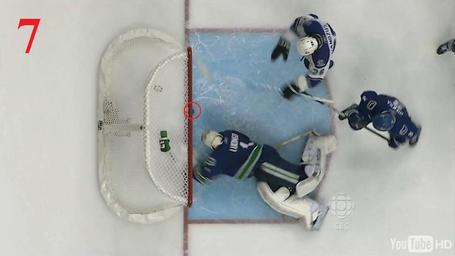 And now Handzus realizes his mistake. The puck is trickling along the goal-line. Luongo is now fully turned around and about to sweep the puck away. Handzus is dropping his hands in an apparent effort to get his stick down to poke the puck in.

Also, in this frame, you can see Luongo's stick getting caught up in his skate. In retrospect, this did not appear to impact the play. However, it did increase its epicness and cause a scramble to unhook the stick before the Kings came back down the ice with a scoring chance. 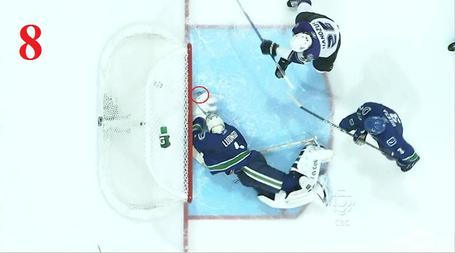 As camera flashes light up the ice in an attempt to capture the potential winning goal, Luongo makes the brilliant sweeping save with his glove. It is too late for Handzus to get his stick in a position to make a play on the puck. 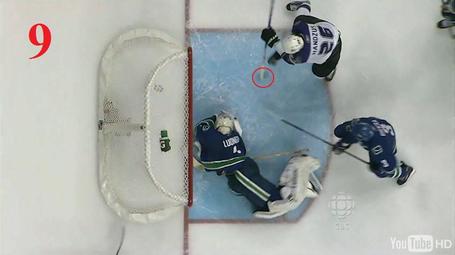 The puck leaves the crease right through Handzus' legs. If he had established a net presence right away, and positioned himself with his stick on the ice, he would have had a tap-in here for the winning goal. Luongo is prone, and incapable of stopping any shot that is not fired directly at him, while Bieksa is too far off the puck to make a play on it. Would Handzus have been in proper position if he had not prematurely celebrated, as in Frame 6? This cannot be known, but I would certainly argue that he would have had a much better likelihood of getting a stick on the puck and banging in the winner.

Also note Luongo's positioning, in comparison to the start of his lunge in Frame 5. This is a remarkable display of athleticism and tenacity on the part of the Canucks keeper. 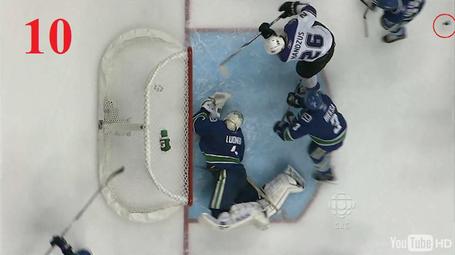 And the puck is away! Luongo has now changed his position essentially 180 degrees from moments earlier.

Meanwhile, Handzus is now almost in a position to score if the puck was still loose, though Bieksa has much better position on him that previously. If Handzus had been in this position in Frame 8 or 9 would he have been able to put the puck in? Again, it is not a certainty, but it is definitely a very realistic possibility.

Four points stand out for me from this breakdown:

Finally, having broken down the play, it is helpful to watch it in real-time as it happened. Note how awkward Johnson's shot looks (and also watch him celebrate in the corner as though he had scored. Jokes on you, Jacky boy!). And in particular, watch the actions and reactions of Handzus during the sequence. Do you agree with my assertion that he jumped the gun on his celebration? And if so, do you think that this prevented him from making a play on the puck that could have led to the game winner? Watch for yourself and decide.