When the Vancouver Canucks signed Mikael Samuelsson as a free agent last summer, there were some people who weren't terribly impressed.  What's so great about a 3rd liner from the Detroit Red Wings?  Well not only did he have a career season, but he showed exactly why Mike Gillis pounced at the opportunity to pick him up.  Samuelsson picked up the tying goal for the Canucks after the Kings opened the scoring, and then fired home the winner in OT on a pass from the NHL's leading scorer, Henrik Sedin.  The Canucks took game one, and if last night's game is any indication we are in for a hell of a series.

Gotta give credit where credit is due, Jonathan Quick certainly showed why he was selected to Team USA's roster for the Olympics.  He battled hard as the Canucks outshot the Kings 44-27, 17 of those shots coming in the first period alone.  The play was slightly tilted in the Kings end of the ice as they dominated 5 on 5 play, and as a team played well defensively, especially after Andrew Alberts braincramped himself out of this series with a hit from behind on LA's Brad Richardson.

Alberts took 2 penalties in the game, and the Kings scored power play goals on both of them.  With Aaron Rome likely to be ready for game 2 Saturday, the chances of seeing Aaron Rome anywhere but the press box have to be slim.  As bad as Alberts was, Alexander Edler was better.  In a performance that was quite likely his best as a Canuck, Edler roamed the ice like a Willie Mitchell/Kevin Bieksa hybrid, with 6 massive hits, none bigger than the one he laid out Drew Doughty with in the 3rd period.

He may not have had the volume of shots that Quick faced, but Roberto Luongo was solid in the Vancouver net, and provided the highlight of the night with that goal line save.  While some Luongo critics will still be out to snipe, Luongo's performance certainly sent a message about how focused he is heading into this years' playoffs.

A solid first game from the Canucks, and certainly living up to the billing as the series to watch in the West.  The Kings are going to regroup and come back hard in game 2 Saturday, but a huge, confidence boosting win for the Canucks will make it more difficult for them to avoid goin' back to Cali down 2-0.

Threeormore and OvechCant, and some old time hockey in Buffalo...

The delicious irony of Tomas Plekanec scoring the OT winner  for the Canadiens on their one time goalie Jose Theodore was one of the best parts of the playoffs so far.  The war of words those two have had in the press has certainly added some fuel to this series, but give the Habs credit, they were focused and played a hell of a road game.  The focus on Ovechkin by the Habs D bordered on brilliant as they held him shotless for just the 2nd time this season.

The spotlight is glaring on Ovechkin now, as some wonder if he's injured, while others think the pressure is getting to him.  I saw some suggesting he's become the East's Joe Thornton.  I wouldn't go that far, but he is certainly not that impressive in big games as of late.  That series is far from won for the Habs, but they have given themselves the kind of shot in the arm that levels the playing field a bit.  Going back to the Bell Center with a split is something few if any would have an issue with.

Things were getting nasty in Buffalo last night, weren't they?  Hits of the clean, not-so-clean and downright dirty variety, even a spear as these two teams expressed their dislike for each other on the ice.  No surprise the Bruins struggled to score, but it certainly wasn't a lack of shots that was the cause.  I fully expect them to knot that series up before heading back to Boston for game 3.

5 games on the bill tonight, as the 4 upset victims from Wednesday night try and get their ships righted, while the Chicago Blackhawks host the Nashville Predators in game 1 of that series.  The Pittsburgh Penguins will continue their epic quest for Jusssssssssssssttttttttttiiiiiiiiiiiiccccccccccccceeeeeeeeeeeeeeee!!!!! 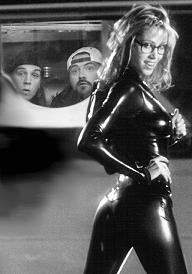 Mhm.  Good luck with that.  Why is it they are 'Out For Justice'?  Post your theories in the comments.  I wanna see if we can crack this mystery wide open...

The Sens are in touch, especially with the loss of Milan Michalek to a torn ACL.  The Flyers and Devils resume their series as Ilya Kovalchuk looks to win his first playoff game, a testament to just how bloody awful the Thrashers have been.  The White Out is back on in Phoenix tonight as the Coyotes look to go up 2-0 over the Red Wings.  And oh yes, There Will Be Snakes.  The San Jose Sharks will try and regroup after the last minute loss in game 1 to the upstart Colorado Avalanche.  The pressure is mounting in San Jose once again.  You have to think the changes will be massive there if they should once again falter in the first round.

Most of the attention tonight though will be on Chicago, as the high-flying Hawks take on a gritty, defensively sound Predators team.  Will the Hawks roll as so many have predicted, or will the Predators continue the upset trends and exploit the Hawks potentially shaky goaltending situation?  This one should be a beauty.