Share All sharing options for: Tuesday Morning Coffee- Rumor Control, Staying Calm, The Other Guys and The Loser Lottery 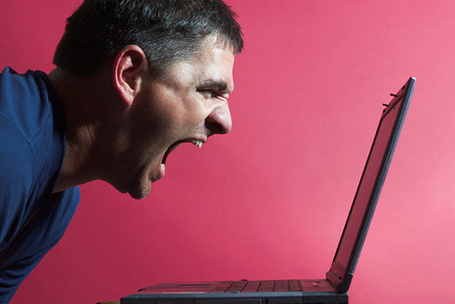 I'm back after a couple days of being under the weather so just to clarify: Yes, I still write for Nucks Misconduct.  Yes, I am still worried about this team, unless something about the way they're playing improves, my mind won't change.  I will also point out, I thought that the ideal matchup for this team was LA.  They should be able to win this series.  From there, it's all about who they play and how they're playing.  Sounds kind of obvious, but it is what it is.  Oh, I'm not a girl, as some courageous soul suggested in my last article.  I appreciate that a posting on the internet can arouse passions in people.  This one certainly did that.  As a writer, you hope for that.  It means people are actually reading it, though I still think some weren't getting everything I tried to express.  So I'm sorry Mojo J, but not only am I unavailable, I'm also male.  And not an attractive one at that.  Too bad, because you seem like such a catch, name calling on the internet is SUCH a turn on to women I am sure.  More after the jump...

The one thing I love is, good or bad... Canucks fans are passionate about their team.  Perhaps it's a bit of a persecution complex we have, constantly being reminded by fans of certain teams (especially those chosen for greatness who are now collapsing in a FLAMING pile of hubris and tee times) about not having won the cup.  It could be that every year at this time we prepare ourselves for what has always been heartbreak.  Even when it's looked like they should be able to win it all, something happens.  I'm not saying they're the Boston Red Sox, but there's something causing this to fall short.  The times we've come closest, it wasn't expected.

So maybe that's the key here.  A scan of the internets  shows you that a lot of the 'experts' (and I say this with no real disrespect, honest) are picking Los Angeles to beat us.  And you thought people got mad at me?  The Twitter machine (h/t to the Kurtenbloggers) keeps belching out 140 character long rants from usually calm and collected Canucks fans, tiny diatribes against hockey writers and TV/Radio types like Bob McKenzie and Jeff Marek.  On one hand, who doesn't love to see the word 'Blasphemy' hurled around?  On the other, it's an opinion.  And haven't they been consistently wrong about this team?

Maybe this is a sign?  I said I hoped I am wrong about them.  Perhaps I'm not the only one.  I will admit that one of the things I've preached all season with the Canucks I seem to have forgotten: Just win, baby.  Sure, the pressure is on, and playoff hockey is almost night and day different than regular season.  Judging by the opinions of some hockey writers, the Canucks are underdogs in some respect.  Not a bad place to be at the moment.  Let's see what they can do with it.  In the meantime, relax.  So what if someone picks us to lose.  If you wanna disagree, fine.  But be respectful.  Leave the over the top histrionics to other teams' fans (and PR departments).

A look at the other series in the West

There are 8 first round matchups, some of them familiar foes linking up to do battle once again.  Others first time playoff matchups that could prove to be beauties.  Today we look at the 3 other Western Conference matchups, tomorrow I will preview the East.

Is this really a coin toss, or is one team going to win this one in a walk?  I've seen suggestions of both of these scenarios for this series.  Obviously there's huge pressure on the Sharks, who have been a dominant team in the NHL for the past few seasons only to be unceremoniously bounced in the first round.  Once again, on paper it looks like a no-brainer.  The Sharks are better offensively, with the line of Thornton, Heatley and Marleau alone, they outweigh anything the Avs could throw at them.  They have great role guys, and defensively are sound.  Evgeni Nabokov was great again this year.  The questions start being asked:  Is this first line going to be invisible like playoffs past?  Will Joe Thornton finally change the perception that he can't win a round in the playoffs?  What about Nabokov?  His Olympics turned into a nightmare at the hands of Team Canada.  Will he see visions of that when Colorado crosses the blue line?  And the Avalanche?  Are these young upstarts, picked by many to be cellar dwellers, in the midst of a rebuild with a rookie coach.  Are they Cinderella, or simply this season's St. Louis: completely drained from playing above themselves just to make the post season.  Craig Anderson was a huge part of the success of the Avalanche, but he's looked tired of late, and no wonder.  He's played about double the games this year than he's had in any one season previous.  The Avs have lost most of their playoff heroes from days gone by as well.  They're on their way back to respectability, but I can't see them winning 4 against San Jose.  They'll give them a series, but it's done in 6.

This one has a few people thinking upset, and no wonder.  The Predators have gotten some amazing goaltending from Pekka Rinne down the stretch, play an extremely tight defensive system led by Shea Weber, and have an interesting mix of youth and veterans.  Barry Trotz has his team totally on the same page, and while they may not have a ton of playoff experience, it would be a mistake to underestimate them.  Chicago were the story of last season, charging out of the gates during the regular season, dumping the Flames in the first round then spoiling our chances in the second.  The Hawks have been downright dominant at times this season.  But there have also been times where they've looked not just mortal, but downright beatable.  Huge questions in goal for Chicago, as Cristobal Huet has not been able to prove himself in playoffs past, and Annti Niemi is a rookie.  The Hawks, when they're good, they're very good.  When they're bad, wow.  They can be really bad.  It boils down to Nashville's ability to shutdown the high-flying Hawks offense, and capitalize on defensive mistakes, something this team is really good at it.  This one's gonna be nasty, and while I think it's almost a coin toss, I will say Chicago in 7.

I have to be honest, I was a little disappointed in this matchup.  The winner will be criticized, and the loser has an excuse no matter how it ends.  These two teams combined appeared in 35 shootouts.  35.  Throw in overtime games and it's up to 51.  If anything, the Bettman point may be hiding that one, if not both of these teams aren't as good as their record indicates.  So it boils down to a team with 2 consecutive Stanley Cup finals appearances with a rookie goaltender, and a team with little playoff experience, that doesn't score a ton of goals.  The cynic in me wonders if the Coyotes have a prayer, as they don't have the shootout to rely on.  I don't want to downplay the job Dave Tippett's done in Phoenix, but I really can't see this ending well for them.  The can Throw the Snake all they want, in the end the experience of the Red Wings should likely be too much for them.  That being said, it's that experience that will get them into the next round, they get there in spite of Jimmy Howard.  Howard's great, but he's no Patrick Roy or Ken Dryden.  There will not be some miracle goaltending story here.  Detroit in 5.

The NHL's draft lottery goes today, as we find out if the Edmonton Oilers are getting a player who can help them try and rebuild the pure suck that team has become.  We also get closer to knowing who Phil Kessel is worth today, so be warned, Leafs fans you know are likely going to be a little more surly than usual.  The Oilers have a 1 in 4 chance of being selected to choose first overall at the draft in June.  They're followed by Boston, Florida, Columbus and the Islanders.  I am sure we've all gave that Draft Predictor a whirl.  My prediction: Boston gets first pick.  The Panthers second, Oilers third, Islanders fourth and Blue Jackets fifth.