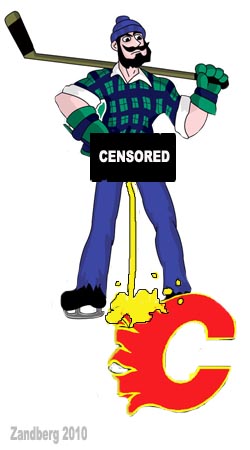 THE ENEMY: Matchsticks and Gasoline

It could have been a story book ending. I was hoping the Flames' playoff hopes would come down to this final game. But Calgary did themselves in earlier than I had hoped. Now it's just another meaningless game standings-wise. Now it's a game that the Canucks have to get through without any more players getting injured.

Vancouver will get Christian Ehrhoff back against the Flames. He is looking forward to one more regular season game to get warmed up for the playoffs. Meanwhile, Aaron Rome, Shane O'Brien and Sami Salo are all listed as day-to-day.

There are two issues that will be forefront for the Canucks.

1. They need to tighten up their defensive game.

It's probably going to be a chippy affair, much like the Canucks-Sharks game. Then again, aren't Canucks-Flames games always like that? Why wouldn't the Flames throw some extra hits on their succeeding enemy? I would. Calgary lost their last home game of the season to the Wild on Thursday, the same night the Canucks put together a semi-pro effort in a 4-2 loss to San Jose.

The Canucks' first round opponent will not be officially decided until Sunday, the final night of the regular season. Saturday matchups to watch:

The Kings can bump Detroit to 6th with a win. Both Detroit and LA play on Sunday. Nashville can bump the Wings to 6th if LA loses on Saturday. This is their final game.

-Jarome Iginla has no points and is a -3 in his last 5 games. Calgary has lost 3 of those games. Tough year for Iggy, but he was man enough to own up to it.

-3 goals and 26 assists is hardly what the Flames are paying Jay Bouwmeester for. What a waste of a $7 million contract he was this season. That being said, he has been looking a lot more like his old self in the past few Flames games.

-Ian White has 3 goals and 8 assists and a +8 in 26 games with Calgary. Impressive. He is about to become a restricted free agent.