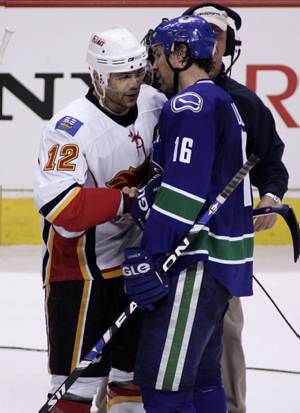 Almost two years ago today (April 6, 2008) the Flames and Canucks met in their final regular season game at GM Place. Having been eliminated by Edmonton two days earlier, the game meant nothing to Vancouver, short of it being Trevor Linden's swan song. In contrast, the Flames were headed to a first round date with the Sharks (a series they eventually lost 4-3).

The Canucks didn't bother to show up that evening. It got ugly 90 seconds in, Iginla would add three points including his 50th goal of the season and the Flames - for all intents and purposes - had the game won ten minutes into the first. Luongo barely lasted 20 minutes. It was also the last time we saw Naslund don the Orca, being saddled much of the game alongside Brad Isbister for some sadistic reason. Sadly it was the last time we saw Luc Bourdon. A week after this game Dave Nonis was fired. The team was firmly at the crossroads.

Now, with the shoe very much on the other foot, one wonders what awaits both teams. For Calgary their GM, coach and All Star RW could have different homes in October. Maybe not, but a shake-up is in order. And Vancouver enters the post season with a bevy of question marks, from the goal on out, with many thinking they won't survive the first round either. We'll get to that later.

As for tonight: will Hank, like Iginla before him, get the points he needs to reach a certain (Ovechkin-threatening) milestone? Is this the last time we see Iginla in a Flames jersey? Will Bourque be saddled with, I don't know, Ales Kotalik all evening? Will Vancouver chase Kipper, blow out a disinterested Flames team?

Maybe the real win is no Canucks get injured for a change.

Enjoy the final night. Your NW division champs start the real battle at home in a matter of days.