Welcome back my friends to the show that never ends: Canucks & Blackhawks

Share All sharing options for: Welcome back my friends to the show that never ends: Canucks & Blackhawks 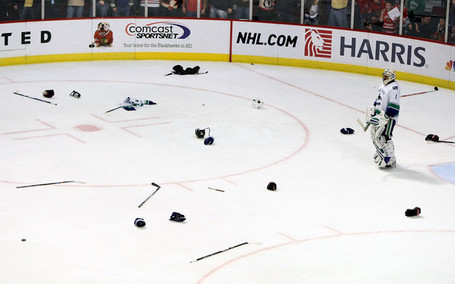 We are just shy of a year since the delightful Vancouver/Chicago linebrawl. Vancouver would win that playoff-like game 4-0, but many realized that night that these teams could develop the requisite palatable hatred for one another necessary for a good rivalry. Maybe rivalry is too strong a word, but damn good hockey nonetheless.

Just that night alone we had Eager and Bieksa, Burrows and Keith's hair, SOB skating around looking to feed his fist to someone, Luongo flopping around and a general introduction to that walking puke named Dustin Byfuglien. The same cast of characters turned it into a great playoff series a few months later, one that Chicago deserved to win. And this year? They've added Mitchell sending Toews into the Van Allen Belt with a clean hit (yes...clean...get it over it) in a game that had a combined five roughing calls. In their next tilt Chicago eeked out a 1-0 win and Rypien and Eager dropped the gloves. And two months ago Vancouver routed Chicago and added that whole Kesler/Ladd "coward" comment to the saga.

So you know the drill already. You'll see the big hits, the usual suspects jawing and the after-the-whistle gentlemanly discussions on the socio-economic plight of the Nepalese. They'll jump all over The Captain every chance they can. I doubt they'll applaud Kesler's Olympic effort (though I could be wrong). Doesn't get much more interesting for Alberts debut either.

A big two points against a big opponent. The Canucks can open up a four point gap between them and Colorado with a win. Not a bad way to kick off the weekend.