A Conversation With Vancouver's Green Men

Share All sharing options for: A Conversation With Vancouver's Green Men 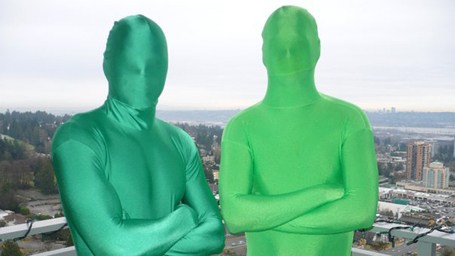 Back in late December, Sean recapped a 4-1 win over the Predators and made a small reference towards the end:

What in the blue hell was up with the green men in the stands? That is some funny stuff right there.

As someone who's been told by bartenders that I remind them of Charlie from It's Always Sunny In Philadelphia, I loved the concept right off the bat.

Of course it got better after that night. Naturally the Preds saw them (Scatchard may still have nightmares in fact). The KB sure noticed. So did the Sun. Puck Daddy mentioned them against both Nashville and Buffalo. Eventually the Canucks marketing team couldn't ignore them. And now opposition marketing teams can't either.

So little did we know that the Nashville win would be the start of the Green Men movement which you can now follow via Facebook, Twitter and their Web site. They just fine tuned their stylish antics at the Olympics and also landed a gig modeling active wear for Agoo Apparel (I know I know, I'm kicking myself for not thinking of this too).

We fired off some questions to the Green Men - who you likely know by now are named Force and Sully - prior to the Olympic break and they were cool enough to get back to us. After the jump we explore when their concept started, their pregame rituals and what teams they really want to see parade to the box next to them. Enjoy!