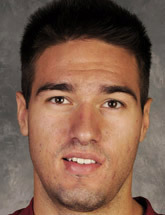 Good on Gillis for getting something in return for one of the worst moves he's made in his short time as GM. Vancouver gets not only a six rounder from Phoenix, but adds Sean Zimmerman, a 6th round (170th overall) pick by the New Jersey Devils in the 2005 draft.

With Zimmerman, what you see is what you get. He’s not going to wow anyone, but he’s a heady, competent, hard working defensive defenseman.  Zimmerman’s commitment to solid defensive play is evidenced by the fact that he has been a plus player in all four of his junior seasons. He has good size, and plays smart and soundly in his own end. He’s not afraid to play physically along the boards and in front of his own net.

Zimmerman will never be confused for an offensive blueliner, but is adept at making crisp outlet passes from his own end. His skating is decent for a man of his size, but he could stand to improve in that area. Another area of improvement Zimmerman needs to work on is his puck handling.

More warm bodies for the Moose. Nothing wrong with adding some prospects when you can.