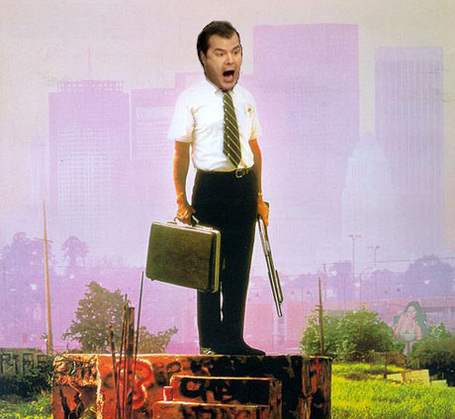 Sometimes the gamethread inspiration just spits in your face.

Anything else you want to review from last night? We know the Captain is scratched but let's spread the hurt around: the Sedins were off (only four shots from that line, friggin' Glass had four alone), Wellwood ruined his great moves and lucky positioning with his patented inability to score (same with Grabner but give the kid a break), Hoff had one of his worst games positionally and almost every point blast Juice took wasn't even remotely close to being on net.

In fact, if you ignore the Canucks only taking two calls (the refs missed several others on both sides), then there's nothing to be happy about. And I don't like not being happy on a Wednesday. It's hump day! There's a new South Park on later.

If they couldn't muster beating the worst team in the league who didn't even play that well, how are they going to contend with a "better" bad team who - like the Oil - also have nothing to lose. That's why you better see an angry Canucks team out there against Anaheim. I'm talking tiger let loose from its cage anger. Not Hordichuk running around trying to fight everything that moves, I mean solid hockey domination. Don't let Anaheim even think of having a chance. Strike early and end this before the second period starts. And by all means send that rat Getzlaf into False Creek if given the chance.

I never liked you. You know why? You don't curse. I don't trust a man who doesn't curse.