Wednesday Morning Coffee- What was that? This is NOT a chawade...

Share All sharing options for: Wednesday Morning Coffee- What was that? This is NOT a chawade... 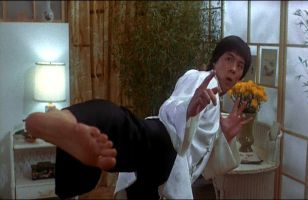 What was that? This is not a chawade. We need total concentwation.  (Taking a deep breath) More than that, we need leadership. We need to know that this game did not have bright sides or positives.  We need to know there was yelling and much breaking of sticks in the dressing room.  I don't want to heat "on any given night.." talk.  That is for losers.  If this team can't rise and beat a team of NHL 3rd and 4th liners and AHLers, how exactly are we to believe they can do anything in the post season?

Think I am being a little harsh?  Too bad.  This Oilers team is infinitely worse than the one we lost to earlier in the year.  I am sick of the no shows.  I am sick of the lack of passion.  There are 9 games left, this team should be playing playoff hockey NOW.  Instead we got treated to something we've seen far too often: a joke of a performance that made a shitty team look better.  Enough already.

The Anaheim Ducks are hardly going to be easy after losing last night.  They'll be pissed off and looking to take it out on a Canucks team they always seem to get the better of.  And they know it too.  So you know they'll be at their douchebaggy best, looking to disrupt and disturb, and get the Canucks off their game and right where the Ducks want them.

You can call me a bandwagoner all you want.  That term is about as overused on the internet as the word 'Epic'.  I refuse to make excuses for a team that continues to not play up to its potential.  I expect to see the defense play like they have against other teams, limiting chances to the outside and not getting walked around like they're pylons.  I expect to see the top line play like a top line, because it's been weeks since they have.  I expect to see 60 minutes of effort, and honestly I am sickened that at this time of year I have to ask for that.  And... I want to see Roberto Luongo on the bench tonight.  Even though I thought he should have sat last night, I want Andrew Raycroft to go in tonight and battle.  It's obvious something's up with Luongo, so rest him, as the next two games are huge.

No breakfast for you

A lot of the anticipated matchups last night turned out to be jokes, didn't they?  Boston shutting out Atlanta, Chicago shutting out Phoenix and Ottawa shutting out the Flyers.  Phoenix's win streak snapped, and they looked downright normal against the Hawks last night.  Atlanta made Boston look good, and Ottawa was full value in their win over Philadelphia.

There's a few big games tonight: Sid and Ovie going head to head again, The Rangers trying to get back into a playoff spot against the Islanders (in 3-D no less), and LA taking on Colorado (without Darcy Tucker, who got a 1 game suspension for being a dirty douche bag).  The Red Wings are using their game in hand on the Flames tonight and can go back to being 4 points ahead of the Calgary with a win.  That would also move them into a tie for points with the Avalanche.  Yeah, be worried.