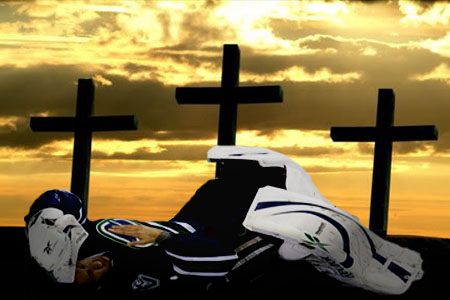 Yeah, yeah, before you start jumping all over me for hanging Roberto Luongo for this loss, hang tight!

I'm not going to lie, my confidence in Roberto's abilities this season has wavered all season long and tonight's performance did nothing to appease that feeling. Blame bad luck on goal 1 for the Oilers? Blame goal #2 on Christian Ehrhoff's bad coverage on Robert Nilsson as he blew by Blastoff and went in on Lou unmolested? Blame the 3rd Oilers' goal on Alexander Edler's stick for getting in the way and deflecting the puck?

Let's stop making excuses for Lou. An elite goalie getting paid this much money has to come through for his team and Roberto did not do that against the Oilers. Instead, he was outshined by Jeff DesLauriers... a guy with a huge weight on his shoulders in this game, as his backup goaltender was just some guy named Nathan Deobald. Had Jeff failed it could have gotten ugly. But he didn't. Instead he was solid, stopping 31 of 33 Canucks shots while the Oil only peppered Lou for 22.

It's frustrating. Sure, the Wings and Sharks lost to the Oilers in the past couple of days as well but I could give a rat's ass. Both Chicago and San Jose won their games tonight to solidify their spots, once again, as the #1 and #2 seeds in the West.  The Canucks are now 6 points behind 2nd place Chicago. Stick a fork in it it's done, as far as I'm concerned. Vancouver is not going to catch the #1 or #2 seed in the West. They remain 5 points ahead of Colorado with a game in hand for the NW Division lead. Not even top spot in the NW is a guarantee. Too many games left.

Conspiracy theorists may say that the Canucks are trying to keep their 3rd seed to avoid playing Detroit or whoever in the playoffs. To that I say bullshit! The Canuck forwards were trying to get a win tonight but were let down by their goaltender. Well, I think lines 2, 3 and 4 were trying, but that's the best of what I saw against Edmonton. Let's see what the stats say...

-Alexandre Burrows played with the Sedins again, registered 2 shots, many missed opportunities, and no points.

All 3 finished an even zero and beyond their goal looked....well...nearly useless.

I thought the 2nd line of Kelser-Raymond and Grabner looked good,  combined for 3 points, 11 shots but were a -1 each.

Most shots on goal from either team: Wellwood with 5

Oilers' defenceman Tom Gilbert had a goal and an assist, a +2 rating and 22:13 played

Aside from all that, Lou was weak. The best part? He owned up to it post game:

"I made some good saves, but unfortunately all three of those goals I should have had."

"I’ve got to find the consistency in my game. Before, I might have a bad game every 10 or 12 games, now it’s every two or three games I’m getting one where I’m not at my best. I’ve got to get that consistency level back and game in and game out I have that swagger that you have to have."

So there you have it. The Captain is challenging himself to be better. Personally, I have faith in the guy. Great goaltenders respond. It's time for Roberto to do just that.