On This Day In Canucks History: March 23

Share All sharing options for: On This Day In Canucks History: March 23 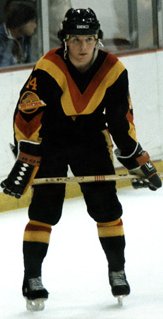 Tanti set a Vancouver Canucks team record in his first full season with the Canucks, his second in the NHL. He scored 45 goals bettering Darcy Rota's previous record of 42. Tanti became a fan favorite in Vancouver, a team not accustomed to having a fine goal scorer. And Tanti became their first true sniper in franchise history. He scored 39 goals after his 45 goal campaign, followed by 39, 41 and 40 goal seasons.

Tanti was the master of the tip-in and scored many of his goals on the power play. In those 5 consecutive seasons of scoring 39 goals or more, Tanti scored 19, 14, 17, 15 and 20 power play goals, respectively.

Tanti and Markus Naslund share the franchise record for hat tricks at 10 each.