On This Day In Canucks History: March 19

Share All sharing options for: On This Day In Canucks History: March 19 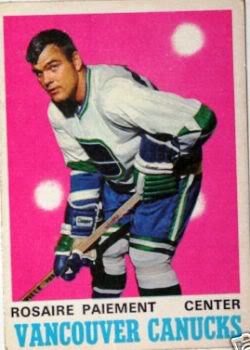 March 19, 1971: Rosaire Paiement scores his 30th goal of the season, becoming the first Canuck ever to reach that mark. The Canucks would go on to defeat the Penguins 6-4.

Paiement scored a career-high 34 goals in his first season with Vancouver. He only played two seasons for the Canucks before moving to the WHA where his career came to a sudden end when Dave Semenko elbowed and punched him in the left eye, causing permanent damage and an early retirement. He currently lives in the Fort Lauderdale area and is part owner of JB Locals, a restaurant/sports bar.