...but I'm not drunk enough to go out on a boat: Canucks & Sharks

Share All sharing options for: ...but I'm not drunk enough to go out on a boat: Canucks & Sharks 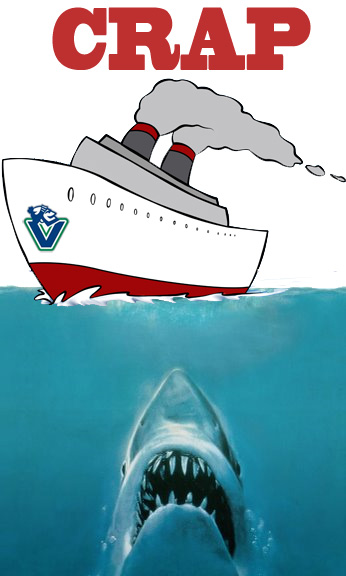 An aside - Anyone seen Jaws III? Dennis Quaid? Louis Gossett Jr of Iron Eagle fame? I saw it as a kid and thought it was cool, hell it was in 3-D! Then I saw it last December again...boy does it suck.

We have two aquatic-themed squads - both on the heels of being embarrassed by non-playoff teams - looking to get back on track tonight. At least they share one thing in common: both hate Chicago.

Vancouver can't overpower San Jose, so they'll need to hang in there for the full sixty. Luongo needs to get back in shape fast and the defense best stick to the safe, smart plays and not hand San Jose any odd-man rushes. No reason to get pretty when you have the best in the conference staring at you from the opposite end.

If the defense and The Captain can do their part, there's no reason these two points can't be theirs. Forget about the loss of F-U and remind Nabakov that he's back on the same ice where he coughed up six goals on 23 shots against Team Canada.

Here's to swimmin' with bow-legged women.