Share All sharing options for: Tuesdays with Milbury: Canucks & Isles

A rare treat as the storied Islanders pay a visit to the car hole tonight. If you're like me (cynical and short tempered) then you may think of a handful of items regarding the fishsticks:

2. Mike Milbury - This really isn't fair to the poor Isles fanbase to bring this clown up, but then again, NBC forces me to listen to him every weekend (saddled with Pierre McGuire of all people, is there no depth to what levels you'll sink NBC?). Anywho let's quickly visit Mike's general management prowess: 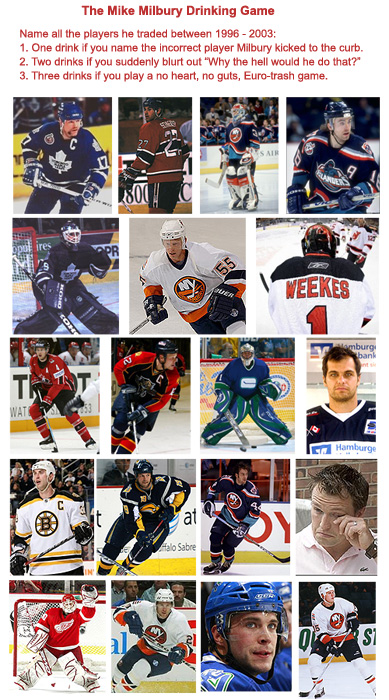 Sure I left a few souls out of this (my apologies to Jason Strudwick and Mike Stapleton) and not everyone is a gem (my apologies to Pyatt and his eyes) but I thought providing the hilarity in picture form beats being the umpteenth blogger who literally lays out the absurdity of some of these deals. And we're not even counting traded draft picks and prospect busts.

But, on the lighter side of things there's always...

4. Stan Fischler - Thankfully, we only have to deal with Fischler once. I wouldn't trust this guy with the remote much less being a such a prominent hockey voice in...wait, what did he say? I take it back: He's an upstanding citizen with keen hockey insights. Here's the remote back good sir, watch what you want.

5. Alexei Yashin - Only a paltry five more years until he's off the books.

These teams did play in the Terrace Hockeyville game back in September (remember when Sean got closer to the Cup than half our current roster?), butt John Tavares and company are back for real now. Though it would take a small miracle for them to bridge the seven point gap between them and 8th place Boston, they can't be taken lightly. They've handily won two straight and, if memory serves correctly, schooled us 2-1 last year in the shootout.

With a win, Vancouver can open up a seven point lead on Colorado (go Blues!) and will be within three points of second place Chicago...WTF?!