Tuesday Morning Coffee- Won't Someone Please Think About The Capitals?!?!?!

Share All sharing options for: Tuesday Morning Coffee- Won't Someone Please Think About The Capitals?!?!?! 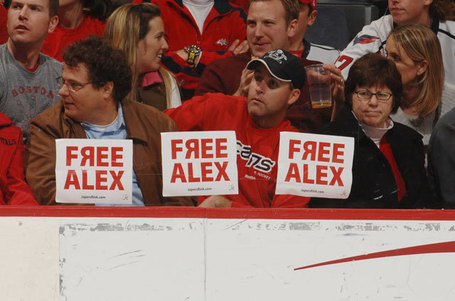 As a blogger, you sometimes struggle with the fact that not a lot of what you write will actually have an impact on this wonderful game we all love.  Yet knowing that in conjunction with the Canadian hockey media we were able to get Alexander Ovechkin suspended, it finally feels like we have a voice.  And that voice will continue to keep the Washington Capitals and their fans pinned to the ground.

If it weren't all laid out on the interwebs for all to see, you'd think it was a joke.  Yet there are journalists suggesting that Ovechkin is being targeted for punishment.  All the usual nonsense is there.  Comparisons of hits that are night and day different.  And of course, the old chestnut "If this were Sidney Crosby...".  I don't know what's worse, the fact that people actually believe there's a conspiracy against the Capitals, or that they have the audacity to play the victim card.

They'd have you believe Alex is the victim, along with the team.  Good lord, they may not actually win the President's Trophy by double digits now!  Alexander Ovechkin could lose the Art Ross.

First of all, the President's Trophy is nice, but history is full of first overall teams that don't win the cup.  It's a vanity thing more than anything else.  A great accomplishment, but if the team were to tank, a 2 game suspension to one of the many star players in their lineup is hardly going to be the reason.

The Art Ross, well... the suspension may keep him from winning the scoring race indeed.  Yet for anyone to cry foul is ludicrous.  The rules of the game are there to keep players from getting injured by the reckless or dangerous actions of other players.  If Ovechkin should lose that race, the only one to blame will be himself.  The reluctance of Ovechkin and the Capitals organization to take any responsibility in this is shameful, and indicative of the problems facing this game.  They're crying foul over a push.  They're going all Zapruder-film on this, stating there's a movement of Campbell's skate that is to blame.  That he knew Ovechkin was there, that he should have known Ovechkin was going to shove him.  That he should have gone straight and none of this would have happened.  It's hard to keep the bile down when I hear the 'blame the victim' rhetoric coming out of the Caps camp.

We can talk about the NHL's inconsistency on suspensions until we're all blue in the face.  None of it makes sense, and we know that.  But suggestions that this was not a suspendable play is garbage.  You want to play the what if game, Caps fans?  Fine.  What if Campbell's head hits the boards first?  What if he fractures his neck, and suffers paralysis?  What if the broken rib punctures his lung and ends his career?  What if he suffers internal bleeding and dies?

Take the punishment, and shut the hell up about being punished.  Bryan Campbell's injuries far outweigh any slight, real or perceived that your team has suffered.  The histrionics coming out of DC on this are embarrassing.  I fear however that my message will fall upon deaf ears, and sooner rather than later, we will be mourning the loss of a player on the ice because some player didn't have enough respect to not take out a player in a vulnerable position.  All it takes is a push.

Another huge game, another 1 goal performance from the Calgary Maple Leafs Flames.  Sure, they got their asses handed to them by the Canucks in the first half of the game Sunday, but in front of their home crowd last night against the Red Wings they really had nothing.  And that lack of energy could be read in the fans reactions to the game.  The Pengrowth Saddledome is usually rocking for the home team, but it was utterly morgue-like at times last night.

The 2nd period save by Jimmy Howard on the Curtis Glencross penalty shot was not just a game changer, it may have been the save that keeps the Flames from making the playoffs this season.  And it doesn't get easier for the Flames.  They have the Avalanche twice, plus the Canucks, Blackhawks, Capitals and Coyotes down the stretch.

If there's a bright spot, it's that they only have 5 home games remaining out of 13.  The Flames are a brutal one game over .500 at home, so the road may be the source of salvation for their season.  The clock is ticking for Darryl Sutter, and you have to think missing the post season will mean major house cleaning in Calgary.

The Canucks are taking on the Islanders tonight.  I will give you a moment to calm down.  Sure, some of us are feeling that uncomfortable twinge that this is going to be one of those games where the Canucks play down to the level of their opposition.  I don't see it happening tonight, this Canucks team is playing with huge confidence right now, and are going to roll against the hapless Islanders.

It would be nice to see the Canucks play Andrew Raycroft tonight, and make sure Roberto Luongo is well rested for a huge game with the Sharks Thursday night.  Then again you could argue with two solid outings, your best bet is to keep Luongo rolling so he doesn't lose any momentum.

Don't forget to check out the pregame and game time threads...