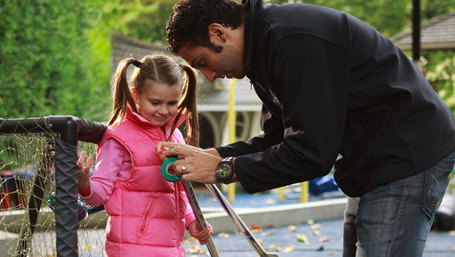 If Vancouver beats an un-Phaneuf'ed Calgary, it will of course be beautiful since: (a) it's Calgary; (b) it ends their four game winning streak; and (c) helps the possibility that they flat out miss the post season.

But check those standings: a Vancouver win helps Detroit. A quandary ensues. Wanting to steamroll Calgary - they lead the season series 3-1-0 by the by - is instinctual, but getting to watch Detroit sit out a post season for the first time since the advent of the cotton gin would be just as delicious.

Keep an eye on Stajan and Hagman since we don't want to reward another former Leaf with a good game this week (Lee Stempniak anyone?). Speaking of which, both the back-up goalies tonight were the netminders for Toronto just three seasons ago. How the mighty have fallen.

The other big news is the Canucks for Kids Telethon (you knew that from the oh-so-witty title right?). We're going to borrow an idea from the SBN sites that ran Haiti fundraisers back in January. For every comment in our thread tonight, we'll donate $.05 to the Canucks for Kids at the end of the game. Don't know much about it, then read more here. Let's reward losing an hour of sleep for a good cause shall we?

Get involved. Gamethread on.