Share All sharing options for: Luongo-Raycroft: Size and Stats Comparison 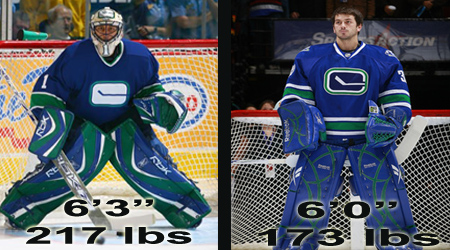 Perhaps the size (weight and height) difference between the 2 may not come as a surprise to most of you, but I didn't know that Luongo was that much heavier. It makes a big difference and it's quite visible when you watch both goalies in action. (Those weights probably vary depending on what site you check out.)

It's almost comical to watch. Both play that butterfly style, where they try to look big and play the percentages, but Raycroft's lack of size must have teams licking their chops because they can (or should if they aren't stupid) pick the top corners on him because there is so much space there. (See: the shoototut against Phoenix). Yet both excel at shots along the ice. They drag their legs and make those saves so often.

Having said all that..

I have been impressed with Rayzor's play this season. Sure, he's playing in less games than he's used to, but his GAA and save percentage are his best since the 2003-04 season with the Bruins when... 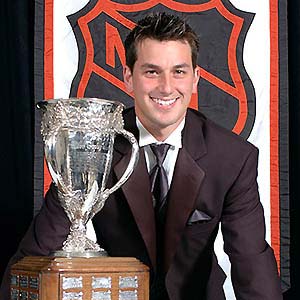 Yeah baby, he won the Calder Trophy as rookie of the year. I say, "good on him." After all the shit and abuse he has taken in recent years, not all of it deserving, he is silencing his critics.

Luongo's GAA and save percentage are (for now) his worst since the 2005-06 season, the final year he played for the Panthers. But he's not that far off. Regardless, where has that dominating Lou gone? I've seen a lot less of it this season. Sure, the Canucks are winning despite all of that, but Roberto has to be better.

It's almost too bad that Raycroft doesn't wear bigger gear despite his smaller stature. I know that Tim Thomas does. He's 5'11" and about 182 pounds, and check this out. What a difference.