Share All sharing options for: You're all clear, kid, now let's blow this thing and go home: Canucks & Coyotes 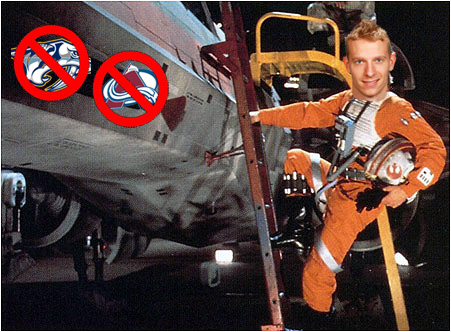 "He wants to contribute and still feels like he has a lot to give . . . whether he's in the lineup every day, or whether he's just a player that can help our power play or whatever role he's given in the lineup, he'll be a real positive influence," Tippett said.

That's Tippett on some chump named Mathieu Schneider. You may remember him as the oldest player in the NHL (though Chelios was recalled today) who just recently bitched and moaned his way off Vancouver for being told to accept the very same conditions Tippett is talking about. Better yet, when he didn't get all of the icetime he felt he deserved, he became a (...wait for it...) negative influence. He can't even start for the Dogs until his most recent injury clears up.

Moving along, the RTFH™ is at long last ending. The goal was to finish .500 and they're guaranteed to end the trip above that mark. With a win tonight, they'll be at 86 points, five behind Chicago and seven behind San Jose. Hell 86 points would put them above any team in the East except for Washington. On the flip side, Phoenix is 29 - 3 - 2 when scoring first, is hunting for their 40th win of the season and old dreamy eyes Taylor Pyatt needs one more goal to reach 100 for his career.

Last night proved anything is possible now, from a crying goaltender to a F-U hat trick in one period. With news that Hands of Stone is out until at least the playoffs, time to sprinkle in a healthy damn Dane dose into the mix. Hansen has two straight GWGs and is the primary benefactor of Bernier's injury. Many of us have waited to see the kid get consistent icetime and - though it took until March - it's finally here. He looks mighty fine climbing into a X-Wing too, don't ya think?

Everything's perfectly all right now. We're fine. We're all fine here now, thank you. How are you?