We partied in Toronto, too! A photo and video diary of the Gold Medal celebrations in TO

Share All sharing options for: We partied in Toronto, too! A photo and video diary of the Gold Medal celebrations in TO 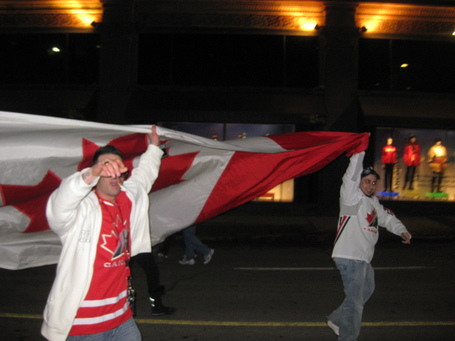 When Sidney Crosby scored last night to clinch the Gold Medal for Canada, it touched off a massive celebration in Vancouver, the likes of which it has probably never seen before. Apparently the party continued through the night into the wee hours of this morning.

But for those of us proud, Canadian hockey fans who were not lucky enough to be in Vancouver for the Olympics, distance was no barrier to having a rocking victory party. And in Toronto, Canada's biggest city, fans took over the world's longest street (or at least the portion of it in the downtown core) for a wild celebration. After the jump, photos of street shinny, insane numbers of Canada flags and hardcore fans - and videos of fans singing 'O Canada' and 'Loouuuing'. 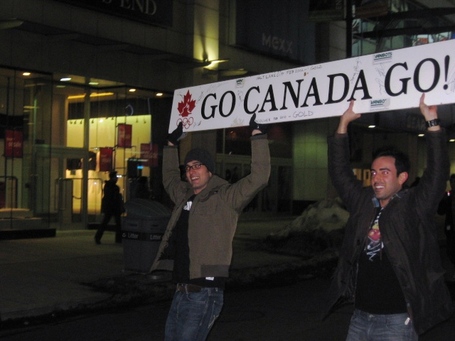 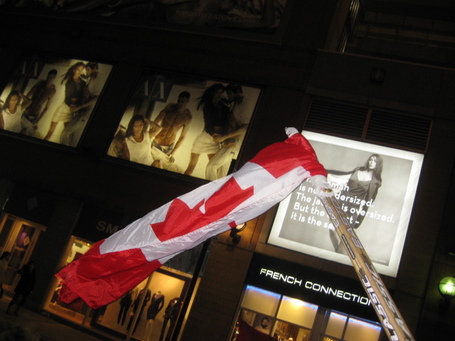 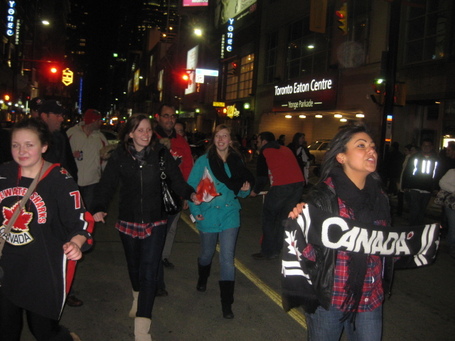 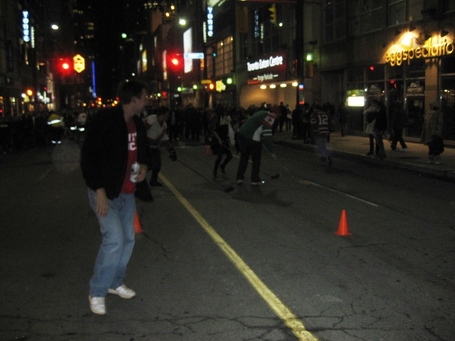 One of the coolest things I saw: people brought sticks, cones and a tennis ball and started a game of shinny on Yonge Street. Awesome, awesome stuff. 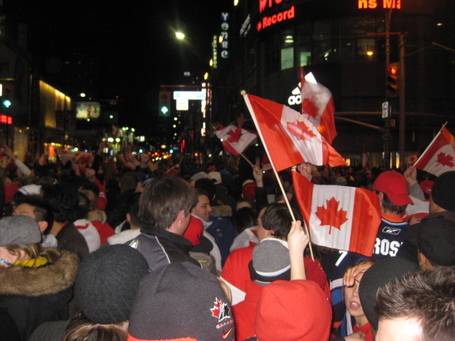 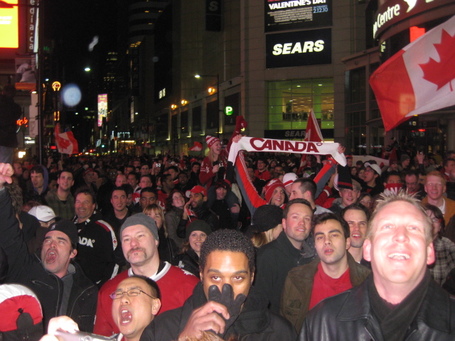 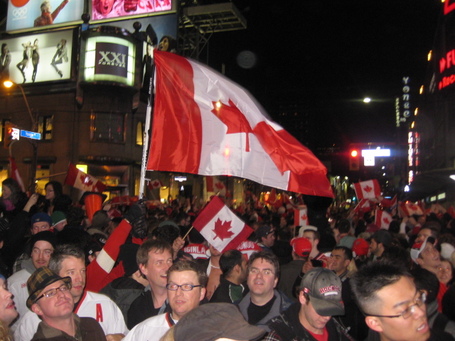 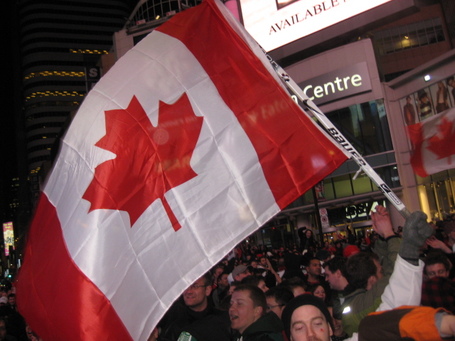 Obviously, there were Canadian flags and jersyes all over the place. I don't think I've ever seen so much red and white in one place. And, of course, there was lots of patriotic singing: 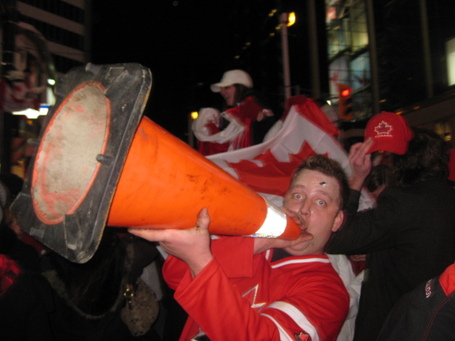 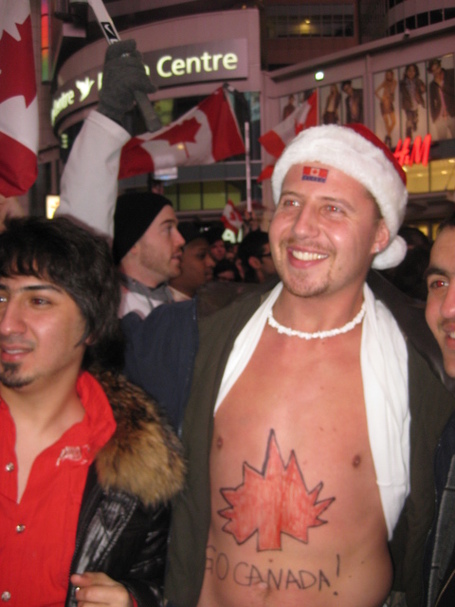 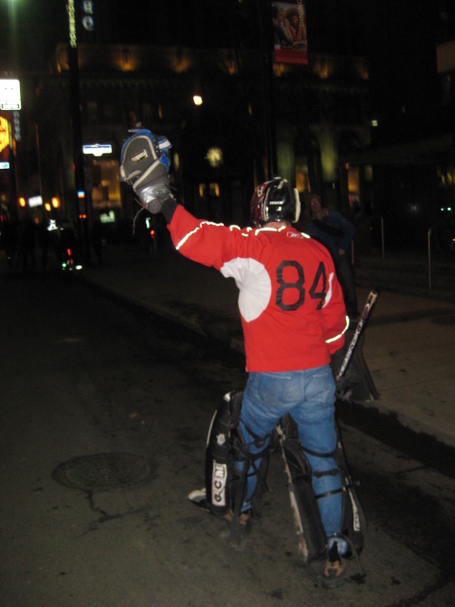 These folks are a sampling of the many amazing and entertaining fans who were out celebrating. 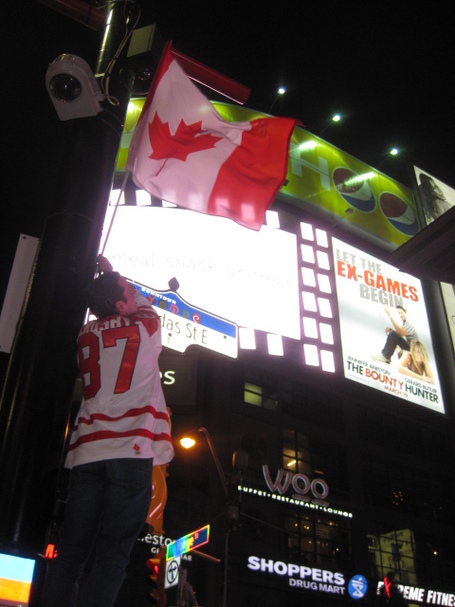 This guy climbed up the lamppost to hang the flag. 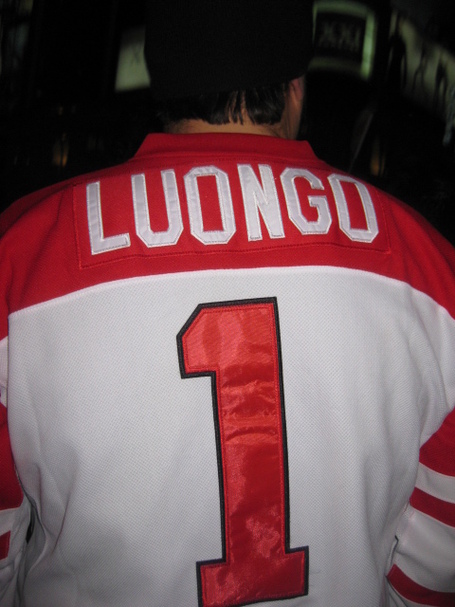 And finally, there were more than a few Luongo fans. I joined some of them in a "LOOOUUUU" chant to celebrate the efforts of the Canucks captain in the Olympic tournament. I am very, very proud of Roberto!

Hope you enjoyed this slice of Canadian hockey celebrations. If you want to see more photos, I have three mini-galleries up at my blog. Enjoy!