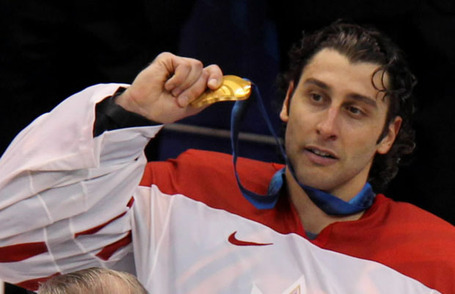 It was easier to write the words heading into yesterday's gold medal final than it is to try and follow it up.  Between trying to accurately describe the emotions this nation felt, to trying not say the exact same things others have already said, it's a challenge for sure.  So rather than a well crafted (or maybe intended) story, I am gonna just plow my way through this and hopefully it comes through coherently.

Sid the Man- Can we please stop calling him 'Kid'?  While some felt that he had a bad tournament, I saw a side of Sidney Crosby that I hadn't seen before.  The guy who was hustling back to help out defensively.  The guy who forechecked.  The guy who despite everything thrown his way, and all the pressure stayed positive.  And after games of relentless coverage by every team that Canada faced, Sid found himself exactly where he wanted, with the puck heading in 1 on 1 against Ryan Miller.  I have a hard time respecting people who bash Crosby, because most of the complaints all go back to he's an incredible hockey player who doesn't play for their team.  He may not be perfect, but heroes rarely are.  I like that there are flaws in his game.  It shows he has room to improve.  That goal was not the kind scored by a kid.  That was a man's goal.

Luuuuuu- As a Canucks supporter, it was an interesting tournament.  From the moment the training camp roster was named in the summer, we Canuckleheads were on the defensive, defending the choice of our goalie at the camp.  Then again when he was named to the team.  So many felt he shouldnt even get a game, that it should be all left into Martin Broudeur's hands.  Yet Steve Yzerman and Mike Babcock obviously felt the way we did out here on the coast, and agreed with what they said; If Broudeur should falter, Luongo will be given his chance.  And he made the most of it.  He may not have gotten the rest some thought he would over this 17 day stretch, but Roberto Luongo showed the world he can win the big game.  As a Canucks fan, you have to like this as we head into the home stretch.

Kesler- Once again more hometown bias, but Ryan Kesler was if not the best then top 3 player for the USA.  He exhibited all of those wonderful things that have made him a fan favorite in Vancouver.  And while some people took comments he made during the tournament to heart (some that had been misquoted or distorted by the media), for the most part Canucks fans were thrilled to see how that nation really took a shine to him.  Now instead of mind-boggling comments about him being dirty, we saw people really appreciate how much the kid from Michigan has in his skill-set.  Ryan Kesler may hate Team Canada, but he doesn't hate us.  Welcome home Ryan.  We missed you, and we are proud of you.

Our Pavol Demitra?- Hands up if you even had Demitra in your tournament pool let alone tagged as the leading scorer.  Liars, all of you!  Whether the Canucks decide to shop him, as his trade value most certainly soared after the tournament he had, or if they hang onto him, it's a win/win for the Canucks.  His leadership and tenacity displayed for the Slovakians showed us the player we thought we were getting when we signed him at the start of last season.  Let's hope it continues.

Vikingstad-  He's 35 years old, a journeyman player in Europe who was a 6th round pick of the Blues in '99, yet he is certainly one of the most talked about names of the Olympics.  The buzz started from game 1 against Canada, but it was his hat trick against the Swiss that sealed the deal for fans worldwide.  A nice bit of levity in a pressure packed tourney for sure.

The Russians- Where to start...?  From their on ice play, the power play that roared from paper like a lion but was as weak as a lamb, to the Ovechkin vs. camera-wielding persons incidents, to accusations of performance enhancing drug use leveled at Team Canada by Pravda , the Russian were a major disappointment this time around.  And with the world paying attention to them as the next host of the Games, to see so many Russian athletes fall flat, highlighted by the hockey team's embarrassing throttling at the hands of Team Canada, you know heads will roll in Russia.

Overall- An incredible tournament capped off with a game for the ages.  The US tv  numbers are staggering: This game was watched by more people than the following sports events: The Daytona 500, The Masters, The Rose Bowl, The last 5 World Series and the NCAA Basketball Final Four.  It even outdrew the Grammys!  As a hockey fan that is thrilling.  To see the game exposed in the US, and have it be such an incredible display, makes me optimistic there's a chance the game can grow down there.  The Canadian tv numbers are even more mind boggling:  an average of 16.6 million watched yesterday's entire game in Canada, with  26.5 million, or around 80% of the population of the country, watched some of it.  Just think about that.  It blows my mind.

I could point out what a gawd-awful job NBC did covering the Olympics, especially from a hockey perspective, but I think I will leave that to our American friends.  I thought overall the Canadian Broadcast Consortium did a decent job, a few hiccups here and there, but considering you had a number of rival networks co-operating for the first time, in the end it was a pretty good result.  We saw some great broadcasting performances from people like Jamie Campbell of Sportsnet and Rod Smith of TSN giving us some memorable gold medal calls.  And the hockey was covered better than in any previous tournament.

The social media aspect to this games made it one of the most enjoyable to date  from a fan perspective.  Through Facebook and Twitter, fans had instant news and analysis if they were away from a tv, and had interaction with journalists and even athletes.  Being fairly new to Twitter myself I was very excited to see just how much this really enhanced my Olympic experience.  A big thumbs up to a few of the journalists and bloggers whose work during the games really shone through: The Kurtenbloggers, for their hilarious hometown look at some behind the scenes stuff; The guys at Puck Daddy; The crew at SLAM Sports; Hosea and Guts MacTavish from 24Hours Vancouver as well as all of the bloggers and social media types from around the globe who kept us updated and entertained on everything there was to see and do in Vancouver.   Even you, Stephen Colbert.

The party is over, the mess is being cleaned up, and we will keep an eye on the Paralympics while we prepare to cheer on the Canucks as they get back into action tomorrow.   With a little more than 48 hours before the trade deadline, it's almost a given there will be changes, especially on defense with the recent news of Willie Mitchell's setback battling concussion symptoms.  It may not have the same intensity for a little bit, and it will be a little strange not cheering for guys like Rick Nash and Jonathan Toews again, but it won't be long before we feel right again.  The stretch drive is here, and led by the goalie that won gold, the Canucks are going to gear up for a long playoff run (we hope!).