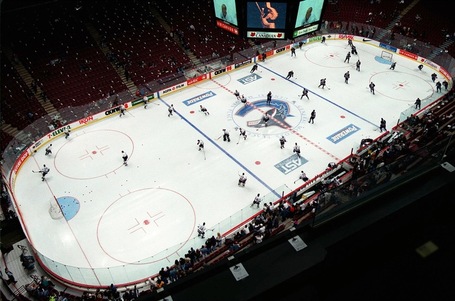 With the Olympics behind us, the trade deadline directly in front of us and the battle for the post season around the corner, let's get a quick pulse check on how Vancouver got to where they are now. All of it: the good, the bad and the ugly.

Starting, of course, with the bad and ugly.

Obviously, this is a highly scientific process. My regression analysis included my anger about the bad things and how the smirk I get with the good things. Is my analysis off? Did I miss anything? Drop it in the comments.

#5 - The Cody Hodgson handling
Vancouver hasn't had a blue chipper with Hodgson's pedigree since that lanky bloke named Linden, so they don't pop around too often. As such you'd think the gloves would be pretty damn soft when dealing with Hodgson's injured back prior to training camp, but it merely split fans and media bobbleheads into two camps: "Cody is hurt" or "Cody isn't ready". What we do know is that after Cody was cut, he spent the following months sidelined by the same injury and didn't suit up for Brampton until early February. Just before the Olympic break, the Hodgson camp told Dave Gagner to go piss up a flag pole. Here's hoping cooler heads prevail heading into next year's camp, assuming Gillis doesn't do something crazy like trade him at the deadline...because that would be just plain silly.

#4 - Mathieu Schneider
This had clown car smashing into chicken truck sliding into bullet train written all over it. No one breathed in Schneider's direction last summer, presumably because he was (a) old and (b) still rehabbing from shoulder surgery. But his former agent Gillis saw no problem with this, giving him a $1.55 million dollar base and a $1 million dollar signing bonus. After sitting out the first ten games, Father Time made his debut in late October and would play only 17 games (scratched 11 times) before he left the team for a "personal matter" which is often times code for "horseshit". Schneider wasn't happy with his playing time, Vigneault wasn't happy with his attitude and Gillis wasn't happy he couldn't trade him. On December 29th the 40-year-old was waived and reluctantly reported to Manitoba in January. Currently he has five points in eight games and it represents a likely unceremonious end to a player's career who should have never been here in the first place.

#3 - Injuries
Party like it's 2008 everyone, the year the Canucks lead the league in defensive man games lost to injury. Early on this season the Canucks were projected to lead the league in man games lost to injury. Someone needs to bolt a horseshoe to Bieksa's chest because he's a king of freakish skate injuries (sliced calf in '07 & sliced tendons in '09). Willie Mitchell has been out over a month with concussion symptoms and he has no timetable for returning. Salo has missed 12 games.  Up front the usually durable Daniel Sedin missed 18 games with a broken foot. Bernier, Johnson, Grabner and Bolduc have all been dinged up. And Pavol Demitra only missed a paltry 50 games. Not to be left out, Luongo missed a handful with a rib injury in October. Only six players - Samuelsson, Kesler, Burrows, Ramond, Henrik and Ehrhoff - have appeared in every game.

#2 - The douche with the laser 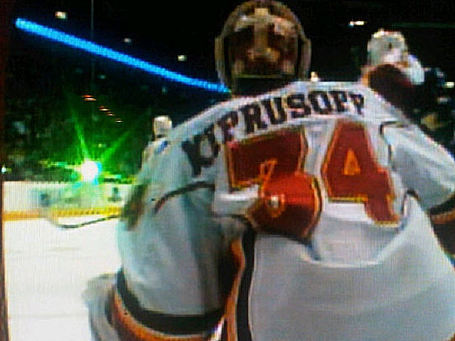 Sure, it was just one game. Sure, other team's have had the same problem. But the fanbase doesn't need any more black eyes and this was a ideal way to fuel the haters out there to think this would carry through the Olympics. Which of course it didn't. But the fact remains: this guy or gal is a douche and if you ever see someone in the arena doing this again, get security or Rick Rypien on them immediately.

#1 - Burrows/Auger
Just writing that meager title makes me tired. Not so much for what or why it happened, but the ensuing fallout from it: the debate over players speaking out over officiating, the McLean hit piece, management's response to CBC, etc. If some definitive league-wide good had come from it, then the sideshow would have been worth it. But there wasn't and won't be. And since there's still no right answer to the ordeal it's best not to attempt one several weeks after the fact. It's probably best to focus on what really happened: the Canucks coughed up two points in a game they could have won. Remember that during the March and April.

#5 - Andrew Raycroft
After being laughed out of two other hockey-crazed markets (I can call Denver that right?), Razor landed in our laps because presumably he was cheap and Luongo is a workhorse. From the beginning there was a lot to be fearful about but a crazy thing happened on the way to the rink: he didn't abhorrently suck. Sure he has had some laughers (blowout losses to Anaheim and St. Louis come to mind) but the whole team sucked those nights. In Raycroft's 597:24 so far, he's pitched in for six wins, a repectable 2.31 GAA and a .912 save percentage. He played admirably when Luongo was injured and got some measure of revenge when he shut out Colorado in November and helped shutdown the Leafs in January (think he enjoyed it?). Even when he loses, he's shown he can be the best Canuck out there.

#4 - Christian Ehrhoff
When Gillis traded who's his name and what's his face for the Hoff and Lukowich, the good guys over at Fear The Fin shared their thoughts on the trade:

Some nights he's going to look great, the next night he might be better off in the press box (hence the nickname "Error-hoff"). His contract and skill set are definitely worth it though, especially since Vancouver needed some offense from the backend. Very good pickup, and worth 3x what you gave up to get him.

Except for the press box part, me thinks the Sharks crew nailed it: the Hoff has been outstanding. His 11 goals and a shooting percentage of .079% are both career bests. His + 24 (also a career best) is the best for the team blueliners, makes him tied for 10th overall in the league and gives him fourth best overall on the team in BTN ratings. Sure he's still prone to errors, but considering what Gills exchanged for him, it's worth every penny.

#3 - Alexander Burrows
He has no shortage of haters, but for the rest of us, here's why you love him:

Undrafted as a bantam, undrafted as an overage junior, arriving in Vancouver as an ECHL and AHL wanderer, Burrows was a player who only impressed you if you were either Manitoba Moose general manager Craig Heisinger on a bird-dog scouting mission or one of the scant number of observers who paid close attention to the Montreal native every day at practice after he reported to the Canucks in January, 2006.

What Burrows has accomplished is amazing, sitting in fifth place in the NHL in goals scored that aren't on the power play -- an odd-man advantage Burrows knows mostly by reputation, not experience. He has 19 goals at even strength and four more short-handed for 23 non-power-play goals.

Count me as one who thought Burrows would tail off from last year's breakthrough. He's currently leading the team in goals (26) and has forced Vigneault to keep him as a mainstay on the first line. There's a reason we call him Mr. Everything.

#2 - Mason Raymond
I'll have another post up on Raymond soon that dives into his numbers, but on the face of it, we may as well call him "night and day" since that's exactly how stark the difference is in his performance the past two seasons. Remember last year when he went - what? - 20 games without a goal? Remember the eleven times he was scratched? Remember this past training camp when he was on the bubble to even crack the bottom six? Forget all that. Eating up minutes on the second line, Raymond has destroyed every personal best he has had so far in his young career. Even better is that he trails only shutdown guys like Kesler and Mitchell when it comes to the quality of competition he faces. His speed coupled with his new-found play-making skills make him one of the best wingers not named Sedin. And as long as we're bringing that name up...

#1 - Henrik Sedin
Daniel's injury gave us all one twin to focus on for much of the early part of the season. It wasn't because Daniel was gone that allowed Henrik to post the numbers he has, but maybe more the change in dynamics: we were so used to watching their tandem cycling attack that the assumption was natural that his play would be compromised without his brother. Far from it as Henrik is currently sandwiched between Ovechkin and Crosby for the lead league in points. Hank's production dropped off - as has the Hart talk - as he entered the Olympic break, but we also learned his was battling a bad back. ESPN (all of outlets) has a nice history lesson if you want to take a look, but considering Henrik entered this season with a fat paycheck and no brother would have given him enough excuses to play poorly. He's done the exact opposite and, with Daniel back and Burrows on his game, it helps explain why the first line has 96 points (Kesler's line has 49) and why they are now the most productive line in franchise history.

Honorable Mention - Despite all the negatives, a home record of 23-7-1 and sitting tied for first in the Northwest heading into March.