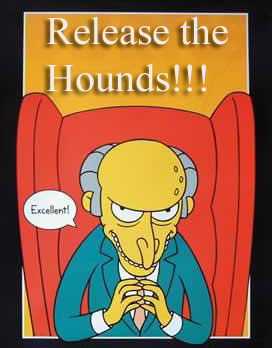 You had to know this was coming: A couple games without production from the Sedins and Alex Burrows and the Vancouver media are after them like starving Rottweilers.

Anyone who thought that the Sedins and Burrows would be able to maintain that mind-boggling pace the rest of the way was simply wrong.  Of course they were going to have some quiet times.  Is it a story?  Is it their fault the team went into a mini-slide?  No and no.  If anything, blame their amazing 3rd period in Toronto.  That little performance likely rallied the coaching staffs in Montreal, Ottawa and Boston to focus more effort on shutting the Sedin line down.

it's not all doom and gloom, folks.  Yes the Canucks didn't want to be at .500 on the road trip at this point, but with the Lightning, Panthers and Blue Jackets coming up this week, the Canucks have an opportunity to stockpile a few more points before the Olympic break.

Despite their Phoenix-like distractions in Tampa Bay, it looks like stability may be around the corner for the Lightning.  With new owner Jeff Vinik moving into place, and Steven Stamkos looking every bit the blue chipper they thought he would be, Tampa Bay might actually survive all this craziness of the last two seasons.  This will be the first time the Canucks face Mattias Ohlund since he bolted for the Bolts back in July.  He has played well for them, providing solid leadership and mentoring young players like Viktor Hedman.  Will be strange to see him on the opposite side of the ice, but just in case they've forgotten... keep your heads up, boys!

Keep it down, I'm trying to sleep!!

Not sure if it's true, but I heard that you can actually hear the party in New Orleans from the International Space Station.  What a thrilling Super Bowl that was, eh?  Drew Brees came out and was simply masterful, one of the best performances in the big game in a long time.  32 of 39, are you kidding me?  The thing I have never understood is the whole knocking of someone's choice in the big game.  There's two teams.  You either choose one, or you don't watch the game.  My rationale for choosing the Saints was simple.  As a Canucks fan, I can relate to a long wait with nothing to show.  That and the city of New Orleans' need after all they've been through.  That onside kick was coaching brilliance.

Honestly though, as good as that game was the game between the Penguins and Capitals was one of the best regular season hockey games I have seen in a long time.  The Penguins looked like they had their foot on the throat of the Caps and their winning streak, until Alex Ovechkin came out and laid waste to the lead notching the hat trick to tie, salting it in OTwith the set up on the winner.  Right now, the Capitals look unstoppable.  You have to think they might be looking at the Olympic break as a bit of a curse, as they have to shut it down and lose that momentum.  You also wonder if maybe they're peaking too early...

Congrats to the Bruins for snapping their losing streak yesterday.  But for cryin' out loud, can they get a better picture of Tukka Rask for NHL.com?  Dude looks like a freakin' mortician.