Share All sharing options for: Wednesday Morning Coffee- The Ballad of Bruno Halakaloogie or How I went to Montreal and didn't get a win 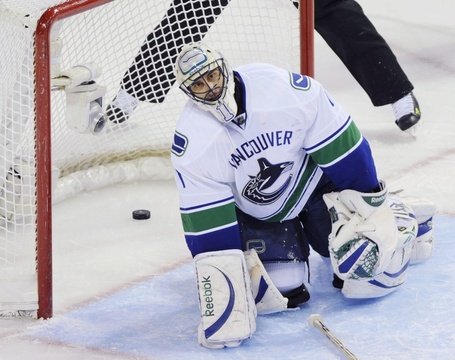 I am sure we all expected this win streak to end soon, but I know I had figured that it would come against the Ottawa Senators.  The Canucks have been playing at an extremely high level for a while now, and they were due for one of those frustrating losses against teams beneath them in the standings and last night was one of those.  A little different this team as they badly outplayed the Habs, who to their credit made the most of the opportunities given them.  Jaroslav Halak was amazing as he stopped 45 of 47 to aid the Habs (ptooey!) to victory.  More after the jump...

As well as the Canucks played last night, there were a few things that jumped out at me.  First and foremost, the play of the bottom 6 forwards, save for Rick Rypien last night was dreadful to say the least.  Steve Bernier did not look like a guy challenged by his coach to perform up to the potential the team believes he has, but a guy complacent with coasting his way through another game, lackadaisically swatting at pucks with no success and seemingly refusing to use his size for anything that could be construed as effective.

Second was just how much the Canucks missed both Sami Salo, who despite looking a little rusty was solid, and Willie Mitchell, when you look at the play of Aaron Rome and Brad Lukowich.  Don't get me wrong, Lukowich has performed admirably since being called up,  but like the bottom 6 forwards last night, these two and Alex Edler just looked slow and out of place all night long.  Edler's taken such a step backward in his play from the previous season, it's almost shocking.  I am not sure what has caused it, but the kid just seems to struggle with the puck on his stick, to the point it makes me nervous.

Third was another sub-par performance from Roberto Luongo.  As bad as the defense played last night, Luongo continued the disturbing trend of being out of position inexplicably, and letting in bad, untimely goals.  Whether it's fatigue or lack of focus due to the Olympics approaching, Luongo is not providing the Canucks with the kind of goaltending they need on this trip so far.

I know it seems like so much whining about just one loss, but let's face it; this team is close to making a big splash in the playoffs, and it's only been the injuries that have kept them down so far.  That being said, they can't go anywhere if they don't address these 3 issues, two of which are fixable by GM Mike Gillis.  The other one is squarely on the shoulders of the Captain.

Last night's Canucks loss was compounded by a 5-1 Colorado win over Columbus, moving the Avs to within 2 points of the Canucks for 1st in the NW Division.  Not that anyone in Denver even gives a shit, as they had their 2nd smallest announced crowd in team history at around 11,000.  I've heard discussion that it's due to the lack of star power but given how well the Avs have performed this season, I think it has more to do with Denver not being as good a hockey town as traditionally thought if the only reason they come out is for big name players.  If the team winning cant get fans into the seats, there's a problem....

I am sure you saw the Monsterbation (tm) frenzy of Dion Phaneuf and his fivehead acending the throne at the ACC, but what made me laugh out loud was the excitement over Phaneuf actually dropping the gloves with feared New Jersey enforcer Colin White.  Yeah, more selective fighting from Phaneuf and to Leafs fans I would suggest they bookmark that fight on youtube, because it's gonna be a long time before you see him do that again.  He has made a career of instigating fights he doesn't follow up on, and I have no reason to think he will do anything different.  That fight was simply to make himself look better, and nothing else.

Another frustrating aspect about last night's defeat is that Phoenix and LA continue to win, meaning the Canucks surrendering their lead to the Avs will see them fall a few spots in the standings.  Home ice is crucial in the first round, so they must step it up as this road trip continues.  Detroit meanwhile now has a 2 point cushion over the 9th place Calgary Flames with a big win over the first place San Jose Sharks.  The Wings are getting healthy, and will still be a threat should they hang on to a playoff spot.  I know I would be worried about facing them in the first round.

The Canucks are off to Ottawa today for their match against the red hot Senators, in what will hopefully be a bounce back game for Vancouver.  With trade rumours continuing to swirl, we will see if the Canucks upgrade heading into the Olympic break as they solidify their chances to take a run in the playoffs.