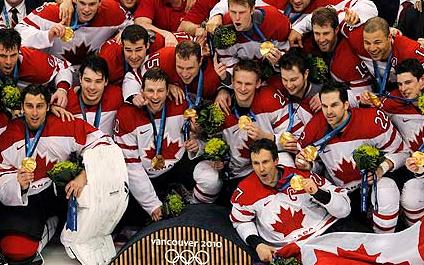 (photo from the Canadian Press)

It's been only a few hours since Sidney Crosby surprised Ryan Miller with a shot along the ice to finish USA in overtime but I'm still in a state of both excitement and relief. I'm excited because that gold win gave Canada the official record and it was done on Canadian soil. But as a hockey fan primarily, that was nearly the perfect exciting game to finish the hockey tournament off, and the Olympics as well. I just want to give the American hockey team a huge hat tip for their effort in these Olympics. I can't count how many times I thought they were going to take that game. I now have an even larger respect for Ryan Miller. Buffalo is fortunate to have a goalie of his caliber. Does anybody realize the agony that would have ensued had the USA won that game?

Anyway, the opening ceremonies are now underway, and to be honest with you, I cannot wait for the NHL season to resume and the Olympics to end. It's going to be hectic! The Olympic trade deadline freeze ends at midnight tonight. The Canucks play the Blue Jackets on Tuesday...already. We will keep you up-to-date on Canucks news. What is Willie Mitchell's status? Who will Mike Gillis acquire at the deadline? A 3rd line player and/or a defenceman?

6 more consecutive games on the road for the Canucks.... and now you know why the road trip from hades......the Olympics. Clean up GM Place and bring back Canucks hockey!!!

In the meantime, enjoy the closing ceremonies!