Saturday Morning Coffee- For underdogs, you sure yap a lot...

Share All sharing options for: Saturday Morning Coffee- For underdogs, you sure yap a lot... 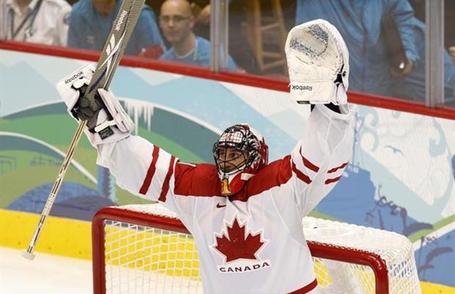 The game was barely over before noted assaulter of cab drivers Patrick "20 Cent" Kane fired the first shot, directed at goalie Roberto Luongo: "I've had my luck against him, personally," Kane said after he scored two goals as the U.S. routed Finland 6-1 in Friday's other semifinal. "So he's a goalie I wouldn't mind facing."  The Washington Post added "If he's got a book (on me), good for him," then made a point of saying Luongo stomped off.  Of course he did... more after the jump...

A tense game last night?  For sure.  You can look at it as squeeking into the gold medal match, or you can look at it like this: with all the chips laid out on the table, Canada's last line of defense was Roberto Luongo.  And with 10 seconds left, he made the big save to preserve the win.  You know, that thing everyone said he couldn't do.  Just more adversity that the Canadians have faced and battled through.  Every time they do this, they get stronger and learn from it.  And if Team USA and it's fans want to think that it was a sign their path to gold is an easy one, let them.  I would love that, and so would Team Canada.

I love some of the talking points that have come out of all this.  Ryan Kesler still insisting on repeating the 'underdog' card is valid for a bunch of NHL stars, undefeated in the tournament.  Saying they've got the book on the goalie.  The 1960 and 1980 comparisons.  Yet it's the 2002 comparison that bears the most weight.  You remember that one, don't you?  America breezed through the tournament, while Canada struggled.  But when it came down to the big game, Canada got inspired performances from it's players and took home the gold.

The questions about Canada's goaltending have begun.  Bloggers and paid journalists alike are trying to plant seeds of doubt into Canadian heads that the goaltending issue is actually a controversy.  That there's some talk of Brodeur starting.  That Coach Mike Babcock has no faith in Luongo.  They will try and tell you Luongo's never won a big game, other than last night.  We heard that a lot, didn't we?  Yet no one has held Miller to the same scrutiny, and I find this odd.  I ask you this then: How many World Championship Gold Medals have been placed around Ryan Miller's neck?

Lots of time to speculate, to prognosticate and to trash talk.  I stand by what I said; barring a total no-show of our team, I am comfortable with silver.  I want gold.  I want it as bad as all of you do.  But I know that in all likelihood, they'll need to play the game of their lives.  Given the lack of adversity that the US team has faced in their road to Sunday's game, the pressure on them to try and live up to previous 'miracles' is far greater than is being acknowledged.

Regardless of the outcome, it's good to see such a tremendous focus on the game in the US.  Although NBC has embarrassed itself and the league with its barrage of ridiculous screwups and underestimation of the demand for the games, people in America are paying attention to hockey.  Win or lose, most of them will stop caring by the end of next week, but new seeds are planted every time they do well in the Olympics.