A note: part of this article was written yesterday, but I had some login issues.  Rather than posting it last night, I did a re-write to include the stuff about last night's Canadian Women's gold.  Also, there's stuff in here that will make Americans mad.  It's a joke, and a response to one made by an American.  Don't get mad, just smile.  It's gamesmanship, that's all. 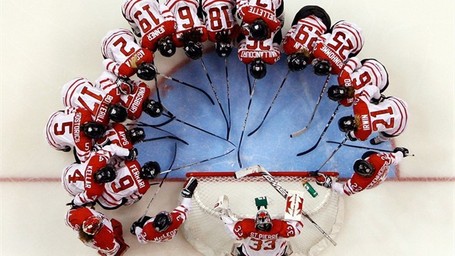 From the flawless performance of Shannon Szabados, to the clutch game of 18 year old Marie-Philip Poulin, Team Canada's women's hockey team proved too much for the USA last night in a stunning 2-0 victory.  A real shame all people want to talk about is cutting women's hockey from the Olympics and the shocking fact that they drank on the ice after everyone left (gasps in abject horror!).  More after the jump...

The Canadian team issued an apology this morning as the IOC announced it will be investigating the 'incident', while they also mull over whether or not to include Women's hockey in further Olympics.  As far as this being an 'incident', seriously... who cares?  Even if Poulin was drinking a beer, I am pretty sure that once the public left, which they had, it no longer became a public event but a private party.  And there's a good chance her parents were there.  In other words, this is a non-issue.

The bigger issue at hand is the nonsense about wanting to take Women's hockey out of the Olympics.  This garbage is being spouted because the IIHF has done a piss poor job of building the game outside North America.  And let's not forget the history books are full of tales of domination in the men's game, in the early years by Canada, then by Russia.  You know why they called the USA's 1980 win 'Miracle On Ice'?  Because it truly was a miracle someone else won.  Yet you wouldn't hear a soul raising this as a sign the game should be removed.  The game is still developing.  Stop worrying about the scores, do more to build the game outside North America and it will get better, just like it did with the men.

And as we relish the ladies' 3rd consecutive gold medal, it makes me think back to Sunday, and the 5-3 loss by the boys to the USA, which prompted ESPN.com's Jim Caple to provide a re-write of O Canada (written by 'a friend' of course).  In honor of the ladies, we've provided a re-write of our own:

Oh say can you see,
By the shining goal light
What was proudly once hailed
Now sits sullen and weeping
Whose broad stripes and bright stars
put up such little fight,
On the tv we watched as Poulin sent you packing!
And the goal light's red glare,
Fireworks bursting in air
Gave proof through the night
Szabados was still there!
Oh say does that Star-spangled banner yet wave,
O'er the land of no free (health care) and the home of second place!

Remember, it's all in fun... so put your guns away haha!

I had some issues logging in again yesterday (thus the name change) and was hoping to talk more about the stunning victory over the Russians. 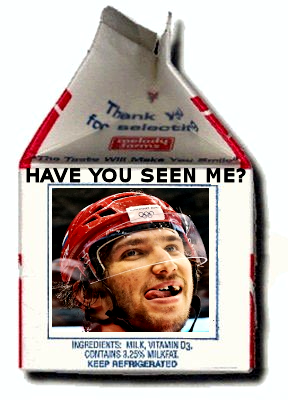 As one of the two faces of the game (he being the devil to Sidney Crosby's angel for lack of a better analogy), Alexander Ovechkin had an opportunity to do for the NHL what they have helped do for him: provide maximum positive exposure to the world.  What we got was ineffectual play, spats with the media, shoving a fan and a no-show on par with his appearance earlier in the season with the Washington Capitals.  While Ovie apologists are crying foul, there is absolutely no excuse for Ovechkin to duck the media after the game.  None.  Imagine if in 1983, when the Edmonton Oilers lost the Stanley Cup finals if Wayne Gretzky had walked away from the press?  It didn't happen because win or lose, it's part of the game.

The Russians lost for a number of reasons.  Sure part of it was execution, part of it was the insistence of including KHL players, but they seem very reluctant to give the Canadians any credit for doing more than coming out hard and scoring goals.  The Canadian defense was stifling.  Russian players who got the puck were hit and hit hard, they forechecked and they back-checked.  It was a complete team game with very few errors.  The reaction of the Russians, from savage media attacks on Vancouver and the country, to the cancellation of the Russian Premier's visit make one think the Russian Olympic Federation really had one medal in mind at these games.  They wanted to embarrass Canada on home ice and be the defending Gold Medal champions in Sochi 4 years from now.  If that's not an inferiority complex, I don't know what is.

How can I eat at a time like this?

As they were in Salt Lake City, the Canadian Men's team were in attendance last night to cheer the Women on to gold.  Some wondered why they didn't look excited.  I say that's game face.  They know they have a tough opponent in Slovakia this evening and aren't take them lightly at all.  Nothing is guaranteed, and upsets happen, the Slovaks have shown that, knocking off the Russians in the preliminary round and the high-powered Swedes in the Quarter-finals.  Pavol Demitra has been a revelation for the Slovaks, tied for the lead in scoring, and as a Canucks fan how can you not be excited about how his recovery from shoulder surgery has turned out.

The Slovaks have a big, solid defense, none bigger than hulking behemoth Zdeno Chara, all 11'3" and 865 pounds of him.  Okay maybe that's a slight exaggeration, but he's a huge dude and well known to the Canadian forwards.  They have a number of highly talented forwards as well, Marian Gaborik, Marian Hossa and Ziggy Palffy (yes, that Ziggy Palffy) who have all looked good at the tournament.  And let us not forget the goaltending of Montreal's Jaroslav Halak, a name we Canucks fans know rather well thanks to the pre-Olympic road trip.

Canada got a number of struggling players awakened in the game against Germany, and the list grew bigger against Russia as we saw Corey Perry and Dan Boyle both stepping up and having huge games.  Even Chris Pronger didn't have that bad of a night, after stinking up the joint in every game previous.

Some worry about an emotional letdown after the win over their arch-rivals.  I think the brain trust of Hockey Canada is way too smart to allow something like that to happen, and from the moment they knew their semi-final opponent, they've been preparing the team for this game.  Yes there is a lot riding on this game.  A chance to play for gold at home, which has been the goal of this team from the moment they announced the Games would be coming to Vancouver.  But this crew, second-guessed at every step win or lose by a hockey-mad nation is taking it one game at a time.  There will be no Cinderella story for the Slovaks this time.

The Americans, especially in the press are talking about a rematch against Canada for gold.  Forget about the dis on Slovakia, what about the Finns?  Behind the solid goaltending of a man well known to us West Coast types, Mikka Kiprusoff has led the Finns to a chance at a 2nd straight finals appearance.  The Finns play a gritty, opportunistic style, and can match the young USA team with speed and skill.

The USA has managed to get to this point without a loss, yet GM Brian Burke still likes to paint them as underdogs (dude, Slovakia's like right there... that's so harsh!).  They've done it with most of the guys expected to lead the way being quiet, getting goals (and not a lot of them) from unexpected sources.  If you had Rafalski in your pool, you're either a mad genius or just mad.  The key will be Ryan Miller.  Can he stand on his head again?  If they get anything below stellar from him today, they will likely be playing for Bronze.