Share All sharing options for: Canada Pounds Russia 7-3 To Advance 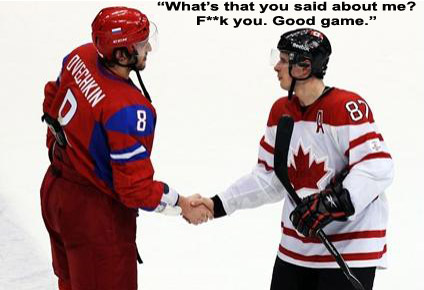 I shouldn't get too cocky so early, but hell, what a win by Canada over the Russians. Sure, they are going to be heavily favored against the Slovaks however I must say....I will flip a coin over who wins in the USA-Finland game. The Crosby-Ovechkin matchup ended up being nearly a non-factor. "Crosby's" team won, but neither player had a point. Ovechkin had no points, 3 shots and was a -2 while Sid had zero points, 4 shots and was an even 0. Overall Crosby played better. But in the end, Dan Boyle and Ryan Getzlaf had a goal and 2 assists each, Corey Perry had 2 goals, and Jonathan Toews and Duncan Keith each had 2 assists. Boyle and Perry finished a +3 to lead the team. It all spells trouble for the Slovaks in the semi's because Canada has everybody rolling. They were relentless against the Russians. Bottom line.

Canada is slated to play the Slovaks on Friday, as are the Americans against the Fins.