Share All sharing options for: Tuesday Morning Coffee- Luongo Prepares For His Moment 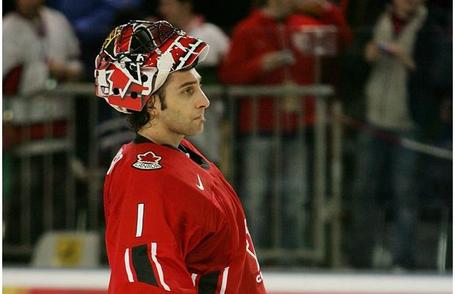 The shock of the announcement by Team Canada coach Mike Babcock yesterday that not only would Roberto Luongo start in goal today against Germany but be the starter the rest of the way is a little puzzling.  Babcock made it clear before the tournament started that should his #1, Martin Brodeur falter along the way, Luongo would get his shot.  So for there to be outcry from journalists and 'fans' of Team Canada is utter nonsense.  Trying to draw positives from Brodeur's performance Sunday is nothing but hero worship and revisionist history.  More after the jump... 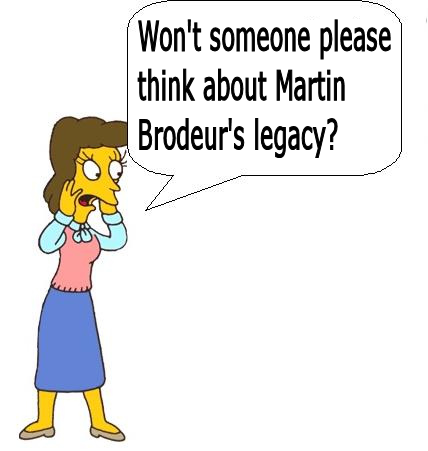 Like a balder version of Helen Lovejoy, The Toronto Star's Damian Cox is once again winning hearts and minds here on this side of the nation with his latest tome.  Cox says that Brodeur felt he was 'blamed unfairly, and undoubtedly disrespected'.  Except that's not a direct quote from Brodeur.  That's what Cox feels Brodeur thinks.

My favorite line is this one: "Not only did Babcock call out Brodeur for his play in a 5-3 loss to the United States on Sunday, he then told Roberto Luongo he would be in goal for the qualification match against Germany a few hours after the game but waited to deliver the news to Brodeur, the winningest goalie in the history of the sport, until before practice on Monday."  I love it.  Suggest conspiracy, paint the two as cads, then throw in the deification of your favorite goaltender.  Martin Brodeur is an incredible goaltender, one of the best of all time.  And in a tournament, where we now are in a win to stay in mode, that means NOTHING.

So sorry Brodeur fans.  Sorry Luongo haters.  Sorry 2nd guessers.  This is it.  Roberto Luongo is your man, the rest of the way.  Even before the announcement was made official, the cries against Luongo were loud: He's never won anything!  Look at his playoff record!!  Okay, let's take a look at those, shall we? (Hat tip to Greg Wyshynski of Puck Daddy)

Roberto Luongo's had some success, but never really been given the acclaim as an elite goalie.  He can change that now as at home, he is given the torch, so to speak.  While Team Canada has a number of issues that need to be addressed, and Brodeur wasn't the only reason they lost on Sunday, the most pressing concern has been dealt with.  Hate all you want, Roberto Luongo is Canada's goalie.  The similarities between this year and 2002 are notable, as Cox pointed out in his article.  But I seem to recall a happy ending because Canada made a switch in goal.

Different line combinations, more ice time as a reward to the younger defensemen  and a challenge to the veterans on this team to stand up and lead.  Yes, it's only Germany and there is hardly a chance of a Switzerland-style upset here, but this team must make a statement with this game.  The Russians, the brash, cocky Russians await.  And while they're a huge challenge in the quarter finals, they've also been inconsistent at best.  Something else you might want to look at, check out how many players on the Russian team have actually scored on Luongo this year.

I don't want to get into that Wednesday game before it's set in stone, in the meantime, a message for Christian Ehrhoff.  Please don't get hurt today.  We need you for the stretch run.  No hard feelings, eh?

So to you Chris Pronger, I say less douchiness, more defensiveness.  Scott Niedermeyer, please don't let this be a blemish on an outstanding career.  And for the love of dog, Joe Thornton... can you please just show up in a big situation?  Just this one time?  And finally... Sidney Crosby.  Here is your chance.  Don't blow it.  And finally to Team Canada, Roberto Luongo is ready to carry you to the end.  He will be working his ass off to make this happen.  See that you do the same.  One team, One goal.  Go Canada Go!

A little side note, while that game on Sunday was no doubt a huge win for the USA, the number of times it's being compared to the 'Miracle on Ice' is not just a little nauseating, but terribly inaccurate.  A team NHL'ers beating another team of NHL'ers is hardly a miracle, especially with the epic brush it's being painted with.  It wasn't an ass-kicking.  They played a great road game, got some jaw-droppingly good goaltending, and capitalized on Canadian mistakes.  Brian Burke thanks you for buying into his meme about being underdogs.  As first seed, that well is now dry.  Guess that makes you the favorites.  Good luck with the Swiss.  They might have a bone to pick with you about Sunday's game being an upset to be mentioned in the same breath as the 1980 win over the Russians.