Share All sharing options for: Sunday Morning Coffee- Which Card Will Burke Play? 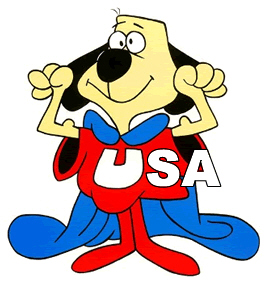 So many cards to choose from in this one... and he can play more than one.  But even before today arrived, with the biggest test for both teams looming this afternoon, Brian Burke has been making sure you know which card he is holding.  And to no one's surprise, especially those of us in BC, it's that U-card.  You know, the Underdog card.

Anyone who didn't see this coming simply isn't familiar with Burke and his relationship with the media.  But can anyone really call a team with NHL superstars be an underdog?  It's not like the Canucks vs. Red Wings from a few years back.  You almost expect a tirade after the first intermission, should the USA find itself trailing, where Burke will say things like "Parise does not play for Team Canada, you might think that because he has spent the entire game with two or three red jerseys on his back", "Kesler is not Canadian for highstick me" and "Patrick Kane did not take a taxi to the rink".

We've heard it all before and we're not buying it.  Not for a minute.  Been there, done that and oddly enough, have nothing to show for it.  In the end, it's two fairly matched teams going head to head.  Do the Canadians have an edge talent-wise?  Perhaps.  Are they the favorites?  According to some yes, but not all.  So to put the Americans in the same category as Latvia and Norway is rubbish, and mere posturing by Burke.

The American's are also wearing a 3rd jersey today apparently, a throwback to the ones worn in the 1960 games in Squaw Valley, when they had their first 'Miracle On Ice'.  Fine, I get that.  The Team Canada juniors wore replicas of the 72 Summit Series jerseys a couple years back.  No biggie there.  We have players like Vancouver's own Ryan Kesler saying he hates Team Canada, which drew some pretty harsh reaction from Canucks fans.  Of course he is going to say this.  It's all part of the underdog mentality.

Here's the deal.  It's not embarrassing if we lose to them.  Seriously.  Our tournament may require an extra game to get to the gold, but it's not like losing to Norway or Latvia, or even Switzerland.  These are two all star caliber teams going head to head for bragging rights and a bye.  Unless it were some ridiculous blowout loss, which is pretty unlikely... a loss to the USA wouldn't be the end of the world.

Kesler's comments put the Canucks fans in a situation many around the league are becoming familiar with: loyalty of country outweighing loyalty to your team.  Just ask the fans in Pittsburgh, who find themselves having to cheer against Sidney Crosby.  In the end this is all just a hockey game between two rivals.  And unlike the trading status between the two nations, this rivalry sort of reminds of the Canucks vs. Minnesota.  It's a rivalry, but it's way bigger for them than for us.  And that's not their fault.  We were raised on the rivalry with the big Russian bear.

As always, we will have a game thread and open Olympic thread (now known as the 'What the hell?  Why do we keep coming in 4th place?' thread) for your perusal.  And if you can, tune into the Jabberhockey show at 2:30 pm Pacific time.  I will be on with hosts Big Tex and The Colonel to discuss the game and talk a little Canucks too.