Saturday Afternoon Tea- His name feared 'cross the land... His name is Vikingstad!

Share All sharing options for: Saturday Afternoon Tea- His name feared 'cross the land... His name is Vikingstad! 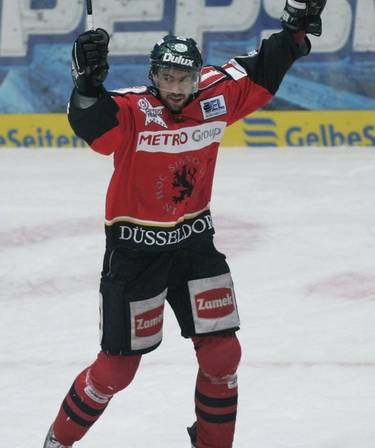 They may have lost the game in overtime, but the Norwegian with the most metal name ever in hockey has become the talk of a town already out of it's mind with the play of guys like Jaromir Jagr, Alexander Ovechkin, Sidney Crosby and Teemu Selanne.  Tore Vikingstad, the St. Louis Blues 6th roundpick in the 1999 NHL Entry Draft may end up being the biggest story of an already incredible tournament.

Given the way this plucky Swiss team played against Canada earlier in the week, there weren't many who felt the Norwegian squad had even a remote chance in this one, and when a penalty shot was awarded to Switzerland's Hnat Dominichelli in the first minute of the game, things looked bleak indeed.

And even after Pol Grotnes stopped the former Kamloops Blazer on the shot, it was just a short while until the Swiss opened the scoring.  Cue Vikingstad.

Romano Lemm ended what would have been a most remarkable upset with a goal in overtime, meaning with a little help, the Swiss can finish as high as 6th place.  While they looked more like the team that sleepwalked their way to a loss to the USA on Tuesday than the team that fought tooth and nail against Canada 2 days ago, it is a sign that the Swiss are making themselves known as a team that can compete with the big boys on the international stage.

While there are still games to be played today, everyone is looking ahead to a day some are calling Super Sunday:  Russia vs. the Czech Republic, Sweden vs. Finland and of course, Canada and the USA.  We will have complete coverage for you as always tomorrow, plus, yours truly will be the special guest on the Jabberhockey radio show, heard on Blog Talk Radio tomorrow afternoon at 2:30 PST.  The guys from On Goal Analysis have graciously asked me to represent Canada in their pregame show, and I am very excited to not only rep the fans of Team Canada, but Nucks Misconduct as well.