Share All sharing options for: Thursday Morning Coffee- Mullet with a capital M 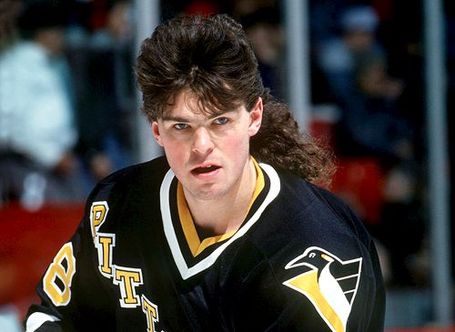 While he may not have the wheels he once possessed, Jaromir Jagr did show us two things last night: he still has a world class shot, and... the mullet is back, baby!  The Czechs and Slovaks give us a hell of a game, and Team Canada looks to exercise a demon.  A demon made of chocolate, cheese and shame.

Even the game time addition of Marian Gaborik, who at times looked to be in a ton of pain, wasn't enough to stop the Czechs from a 3-1 victory.  The pace and intensity of this game was by far the best of the tournament, as most of the matches have been of the one-sided variety thus far.  Vancouver's Pavol Demitra set up Gaborik on the Slovaks only goal of the game, while the Czechs got goals from Patrik Elias, Jagr with a partial breakaway beauty, and Tomas Plekanec, set up by Jagr.

The Swedes and Finns both won their opening round matches, neither in terribly convincing fashion.  The Swedes got goals from Loui Ericksson and and former Canucks defenseman Mattias Ohlund.  Henrik Lundqvist had the shutout for the Swedes.  In the early game Finland survived a scare from Belarus when Mikka Kiprusoff gave up a weak one on just the 4th shot of the game from the Belarus team.  They went on to win 5-1, but given the wide shot margin and way the play was dominated by the Finns they can't be terribly thrilled with the victory.  Kiprusoff's lack of focus and some lazy play in their own end led to a goal that really was against the flow of play.

Three games on tap today, the US takes on Norway in the opening match, the afternoon  game sees Canada facing the Swiss, and the late game sees Slovakia right back at it, this time against the Russians.

You can't blame anyone for being nervous about the Swiss.  They have some NHL experience and much better goaltending than the Norwegian team, and the memories of Turin are still fresh in this country's collective hockey psyche.  Team Canada never recovered from that loss in 2006, and much of the make up of the team that Steve Yzerman and his staff have put together has been designed to deal with big games, mentally and skill-wise.

A great article in today's Vancouver Sun took a look at the team bonding going on with the Canadian boys.  And while the attitude is relaxed and confident, the competition for icetime, as well as which goalie gets the nod against the USA on Sunday is in full swing.  As the teams they face get better, we can be sure we won't see the same divvying up of icetime that Mike Babcock and the coaching staff showed us on Tuesday against Norway.  There will still likely be some line juggling and adjustments, but I would imagine the lines you saw at the end of the game will be the ones they start with at 4:30 tonight.

More coffee... and bring me a funnel.

I am not a huge snowboarding fan, but even to the casual observer the gap between Shaun White and the rest of the field is so vast, it's mind boggling.  That was some sick shit, as the kids say...

Canada picked up another medal, a silver to Marianne St-Gelais in the women's short track 500m speedskating.  Canada's Jessica Gregg (daughter of former Oiler and Canucks forward Randy) finished 4th.  BC Place was rocking last night as they had the medal presentations for the women's Boarder Cross.  North Vancouver's Maelle Ricker, along with Alexandre Bilodeau have really become the faces of these games for Canada, not just because of the gold that hangs around their necks, but because their stories are true examples of the Olympic spirit.

Meanwhile, in a hotel room in Whistler, executives from NBC are hastily trying to work on a storyline for Lindsay Vonn's appearance in the Super G.  There is rumored to be discussion they may have to bump off a family member, as there's too many camera's around to Gillooly her...

Much is being made of the security breach over a 'mentally unstable' man using forged security passes gaining access to the opening ceremony to try and get near US Vice-President Joe Biden.  The man, in custody is reportedly obsessed with Biden.  No offense, but isn't that kind of like being a fan of Ringo rather than the rest of the Beatles?  Either way it's not a big deal.  It's being reported that he got within meters of Biden, so Americans won't know what that is...