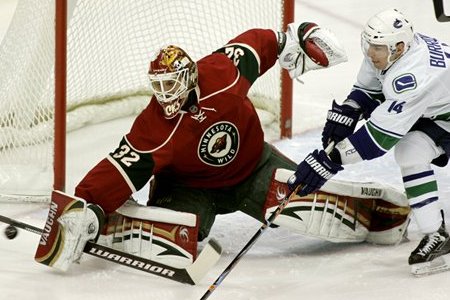 A lunch date with the Minnesota Wild and a chance to go 5-3 on the first half of the Road Trip From Hell (tm) is on tap this afternoon, as Roberto Luongo gets 1 last chance to show Steve Yzerman he is ready to rock later this week (and maybe beyond) at the 2010 Winter Olympics in Vancouver.

At the beginning of this historic roadtrip I felt that if the Canucks went 6-2 on this first segment I would be pretty damn happy.  5-3 is still acceptable, and while they haven't played their best hockey during this segment, the mental boost of going into the Olympic break with a 2 point cushion over the Avalanche and a road record over the .500 mark would be something they could build on upon their return.  We know that the Canucks have been in discussions with a couple teams, Carolina for one to see about getting some help on the blue line and their bottom 6.  But with Mike Gillis not willing to mortgage too much for help now, I am not going to be totally shocked if we don't see much movement before the trade deadline.

As mentioned Luongo will be starting for the Canucks this afternoon, coming off a 3-0 shutout of the team that traded him to the Canucks, the Florida Panthers.  Luongo is scheduled to get the start for Team Canada Thursday against Switzerland, and all eyes will actually be on Martin Brodeur Tuesday against Norway.  Simply winning the game may not be good enough for Brodeur.  If Luongo is stellar against a Swiss team that Canada knows better to underestimate, there's a good chance he could get the nod against the US.  Let's face it, apart from a couple hiccups on this trip, Roberto Luongo has been pretty damn solid, where as Brodeur has seemed to get worse as the Games approach.  It's certainly created some anxiety for Canadians, as the pressure to win is off the charts.

The Canucks and their handful of Olympians meanwhile need to focus on the task at hand, an important game against a divisional opponent.  The Wild have struggled as expected this season, though at times they have shown signs of heading in the right direction.  The Canucks will be looking to exact a little revenge for a 5-2 loss in their last visit to the Xcel Energy Center back in January.  It's possible we could see Pavol Demitra back in the lineup for the Canucks today, as he gets in 1 last game before playing for Slovakia in the Olympics.

If you haven't already, Sean has the full breakdown of this matchup in his pregame report...

The Winter Olympics are hear... pack some shorts.

To say the Games are off to an odd start is an understatement.  Rain, warm temperatures, violent protests and of course the tragedy on the luge track have ensured that these Games will struggle to be remembered for the athletic achievements.  Canada did medal on it's first day, an outstanding effort on the Women's Moguls by Jennifer Heil.  Anyone who thinks she choked should give their head a shake, she left it all on the hill and the winner was only slightly better.  Case closed.  The gold medal on home soil is an inevitability, the press need to stop acting like it's the end of the world it didn't happen on Day 1 of competition.

Ryan Getzlaf was a no-go against the Flames last night, and will likely not go against Edmonton tonight, leaving Steve Yzerman to make a literal last second call on whether to keep him in the lineup or go with the Flyers' Jeff Carter.  It speaks volumes about how much value they place in Getzlaf that they are waiting to make this decision.

Speaking of the Flames, while Kiprusoff stole another one last night from all accounts, it was encouraging to see Jarome Iginla notch a pair.  He needs to be at his best for Team Canada as one of the Canucks most hated rivals pulls on the maple leaf and prepares to call Canada Hockey Place his home for a couple weeks.

It's interesting to see Carolina in full on spoiler mode already as they added the New Jersey Devils to their list of recent victims.  This team is much better than their record indicates and you don't hear a whole lot of teams knocking the Canucks for losing to them earlier this season, mainly because the 'Canes have done it to their team as well.

Another day, another OT loss for the Caps.  I can't recall a losing streak like this one before, where the team continues to pull away from the pack.  And while no one wants to say it, I am gonna put this out there: Anyone get the sense maybe the Caps are peaking too early?  Discuss...