Not all Swedes are good - Canucks & Blue Jackets

Share All sharing options for: Not all Swedes are good - Canucks & Blue Jackets

Before you run headlong into a jingoist Olympic drooling frenzy, let's revel in a bit of hate for a single Swedish individual: Kristian Huselius.

Like many addicts before him, he's spent years abusing Vancouver. In the last ten games against the Canucks, he's scoring at a point per game clip (6G and 4A). This season alone he has four (2G, 2A). All of this stands to reason if you check his history. When he visits GM Place, he has 15 points in 19 games, meaning in about 79% of the games he scores and that's when he is a visitor. That's better than the four years when he played at home as a Panther (about 50%) or in his two years at at home as a BJ (about 71%). Also chuck in the mix three GWG to go along with his second best shooting percentage (.250). So thank you Winter Olympics for keeping him out of GM Place. 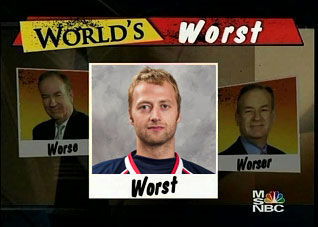 Vancouver needs a win to keep Colorado in the rearview and not let teams like Calgary and Detroit sneak up the ranks behind them (damn what a difference a year makes). They need a win to head into the Olympic break confident that the road trip from hell is half over and they are better than .500%.

But selfishly? Just keep the rat off the scoresheet.