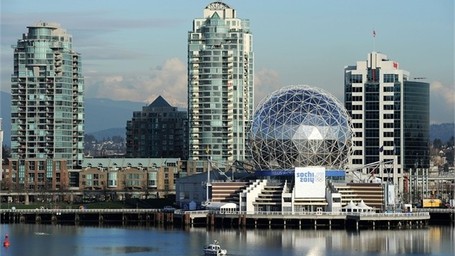 If Olympic fever hasn't completely overwhelmed you yet, I have no doubt it will.  The world has come to Vancouver, and it's going to be a party like we've never seen before.  Oh, and the Canucks shutout the Panthers in Florida last night, but we will understand if you're not paying attention...

As the eyes of the world turn their gaze to the best place on earth, the Canucks continue the Road Trip From Hell (tm), as they picked up a huge win last night, shutting out the struggling Florida Panthers.  Roberto Luongo gave another strong performance with a 31 save shutout.  Florida also hit 5 posts last night, and considering the lack of bounces that the Canucks have had on this trip, it was a welcome sound indeed.  Alex Burrows got off his mini-slump with his 26th of the season from Henrik Sedin, the early 2nd period goal standing up as the winner.

They got insurance via a very sweet shorthanded goal from Jannik Hansen and a late 3rd period PP goal from Ryan Kesler.  Kesler's play on this road trip, especially in the last 3 games has been a revelation, as he has been criticized for being a tad invisible on the road this year.  Nice to see him step it up as someone in a leadership role as he is, is expected to do.

No rest for the wicked (literally) as they are right back at it this afternoon in lovely uh... Columbus, Ohio against the now Hitchcock-less Blue Jackets.  The BJ's are seeing a bit of a new coach bump right now, and always play the Canucks hard, and while a trip to the post-season is looking slim at best, this is still going to be a tough challenge for Vancouver.

Andrew Raycroft will get the start tonight, as Roberto Luongo will rest for that important divisional contest Sunday in Minnesota.  I don't think we will see any changes from last night's lineup, especially with how well they played.  Make sure and check back for the Preview and game day thread...

It's really tough even for the most diehard hockey fan to stay focused on the NHL with all the history being made as the Olympics officially kick off tonight with the Opening Ceremonies.  Still no word on who will be lighting the cauldron, though I must say I am a little disappointed that it's not Wayne Gretzky firing a flame puck to ignite it.  Call me a stereotypical Canadian, eh?  My longshot guess?  Paul Henderson gets snuck into town and comes out, to give Canada an emotional boost and a little historical inspiration.

There was some other hockey last night as well... the two hottest teams in the East got locked in a classic defensive struggle, Ottawa prevailing 6-5 over the Washington Capitals.  The Caps are now gripped in a 2 game losing streak, and the reaction from fans and media varies from blowing up the team, exhuming Rod Langway (wait, he's still alive, right?) and trading everyone.  Oh, and blaming the Canadian media.

Meanwhile the Calgary Flames continue to show that Darryl Sutter is a masterful GM, the trades to bring in more offense have worked out well for them.  The 3-1 loss in Dallas now means both the Stars and Detroit Red Wings are a point behind.  Calgary's chances of making the playoffs with the crew they have right now are not looking good, unless they somehow figure out how to score.

Buffalo and Ryan Miller continue to struggle, their OT loss to the suddenly surging Carolina Hurricanes helped Ottawa pass them for first in the Northeast last night.  Miller lost it after the game, saying "We're not going to coast into the playoffs," Miller said. "If we keep up this pace, we're not even going to make the playoffs. This is getting ridiculous."  Not a good sign for the US team heading into Vancouver next week.

Hard to believe the first Olympic action actually starts at 10am PST, with ski jumping preliminaries getting underway.  With that and the trade freeze kicking in at noon, it's gonna be a very exciting day!