If There Ever Was A Team To Beat On: Canucks-Panthers Preview

Share All sharing options for: If There Ever Was A Team To Beat On: Canucks-Panthers Preview

After looking at the above Panthers stats you have to think that the Canucks have a good chance to take this one. The Canucks give up first goals a lot lately, but the Panthers are ranked last in the NHL when scoring first. They are 28th in the League when leading after the first period. They give up more shots than anybody. They have lost 4 in a row....

Yes, it's time for the Canucks to get their head out of the sand and come storming out of the gates and take control of a road game. They are 2-3 on the road trip from hell so far. Perhaps the Panthers won't smother the Burrdins as much as the other teams have thus far and line 1 can get rolling again. It's only a matter of time. It's also a necessity. When the Sedins put up points the Canucks win more often than not. That also points to the glaring fact that the Canucks need more secondary scoring right now.

With the Panthers out of a playoff spot and having lost 4 in a row, their GM Randy Sexton had some harsh words for his team: "It was [expletive] brutal. We have too many guys who don’t compete. You can’t win in this game unless you’re ready to show up and go to war every night. We don’t have enough of them. This is not type of team we want. We’re going to keep making changes until we get that. It takes time. It’s like turning around the Titanic and not a rowboat."

More on that here.

Craig Custance from the sporting news said on Twitter Wednesday that teams have been inquiring about Dominic Moore, Jordan Leopold and Dennis Seidenberg, and that if the Panthers lose to the Canucks the Panthers are open for business.

-The Panthers have only scored 6 goals in their last 5 games and have a 4-1 record.

-Nathan Horton has the injury bug again this season, after playing in only 67 games last season. He has not played since January 21 because of a broken leg.

-Ice Dancers calendar? Yeesh, not everything is bad for the Panthers!

OK, a few vids to get your blood pumpin':

1. Roberto Luongo's top 15 saves. Appropriate because many of them were from his days with Florida. Thanks Mike Keenan.

3. Fight From The Past: Darren Langdon (Nucks) vs Peter Worrell (Panthers)

Oh, and Lou, that is one of the ugliest and cheesiest masks I have ever seen: 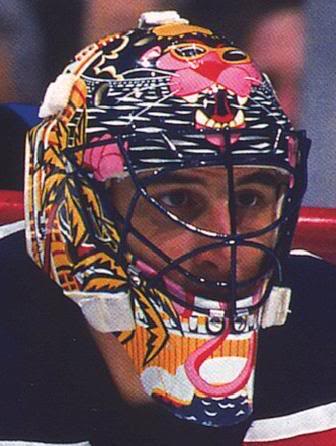