Enhancing Your Experience: Blow Up The All-Star Game

Share All sharing options for: Enhancing Your Experience: Blow Up The All-Star Game 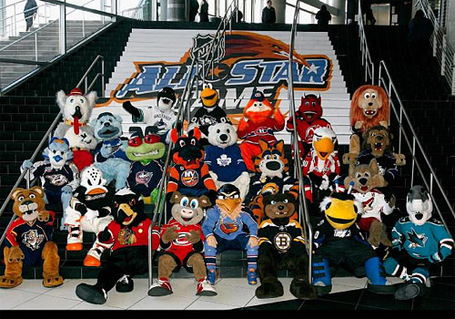 Disclaimer: It's another SBN Samsung Friday where we openly discuss how to make our game better and you remember the word Samsung. See? It's already working.

Every year the braintrusts that run our precious league of hockey superstars and runner-ups gleefully celebrate two big marketing events: the Winter Classic and the All-Star Game. The Winter Classic was a stroke of genius on their part and, though they run the risk of losing momentum by not offering better match-up's, it's probably the one most fans would opt to watch if they aren't revoltingly hungover from Auld Lang Syne'ing their brains out the night before.

The All-Star game is on the opposite end of the spectrum. The gimmicks of the skills competition are debatable entertainment yet infinitely more enjoyable than the actual game itself. Every non-Winter Olympics season is the same: I don't care who from Vancouver is playing (unless it's Rory Fitzpatrick and that was a gimmick in and of itself), I have no reason to care who wins and I truly don't care who gets to drive the MVP jeep home.

Enhance our fan experience por favor: blow up the All-Star format or kill it entirely.

All Star games are supposed to be where the stars of your league take center stage when in reality it's for big ticket sponsors and little else. Regardless they still need warm bodies in the seats and at home to watch it and selling these events is rarely easy, often involving incentives to both players and fans. The MLB All Star game features the homerun derby for the fans the night before and the winning league gets home-field advantage during the World Series. Yet their ratings are down, dramatically so if you go back a few decades (blame the internet). The NFL's Pro Bowl has long been a joke, suffering from voting issues (players and fans vote) to complaints that it's nothing more than a high-profile scrimmage played after the season is over. It's ratings have been poor until this January when they (a) moved the location and (b) played it before the Super Bowl. The result: most watched Pro Bowl in a decade. The NBA All Star game usually gets strong ratings (due to its lifetime pact with Satan and all) but last year went up against the Winter Olympics and emphatically lost.

The NHL has experimented with different formats (Heroes of Hockey, World All Stars) and different days of the week, yet it never seems to take hold. Its ratings are ugly even when it does well:

Versus drew a 0.8 overnight rating for coverage of the [2009] NHL All Star Game on Sunday, up 12% from last year, according to USA Today. While it is tough to quibble with a double-digit increase in ratings, the 0.8 is still very unimpressive. As USA Today notes, "six weekend ESPN/ABC X Games shows drew higher ratings than the NHL All-Star Game."

Making matters worse, last time around the NHL actually punished players - Pavel Datsyuk and Niklas Lidstrom notably - for skipping the event due to injuries. It wouldn't have made a difference: the All Star events were more well known for the Habs voting everyone and their mother into the game and the countless twittergasms following Ovechkin's breakaway challenge. It's a shame the Young All Stars game is coupled into this mess since - even with modified rules - that's an interesting concept that isn't played up much in American markets.

Since we're playing hypothetical here (we can ignore the money interests, hooray!), how about considering the experimental route. Every year pundits whip out their obligatory "how hockey can be improved" piece (see?). If the league has to grind to a halt and tap-dance for money, why not try some of these ideas out? Make the rink international size, let the players have no limit on their blade curves, enforce no skating backwards for forwards in the neutral zone, play 3x3, whatever. There's no shortage of complaints about what's wrong with hockey, so why not try a few suggestions showcased by your best players? It would at least offer a new twist to an event that has no lasting impact and maybe they stumble onto something that could change the game.

So instead just kill the All Star Game. Focus league efforts on the Winter Classic(s) and - if we have to get in the habit of a slowdown in late January - make the effort community-based. By which I mean give all teams five days off to heal up for the playoff battles ahead, host a ton of open practices for fans to check out, set up a number of outreach programs where players can help various non-profit initiatives and fans can come, meet the players and do something positive for their own city. Get the players involved with youth hockey games for a week. It doesn't even need to be so PG-themed: Puckbunnies night at the Roxy sells itself if you get the Alex Edler's of the world in there. You're telling me Ryan Kesler, a copy of NHL 2K11and a pub with a decent TV won't be jammed pack with fans? The NHL is still selling itself without the hoopla of an forgettable event and the fans (we who, you know, pay the salaries around the joint) can more closely benefit. It would also separate the NHL from the other big sporting leagues and truly showcase what makes them better: their attention to the fans, the community and the culture surrounding this great sport.

I know I know, it'll never happen. Just as we did last week: dare to dream the impossible.