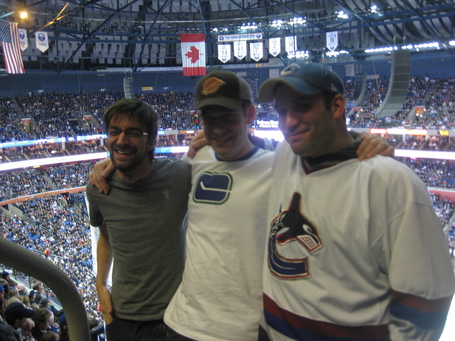 As a transplanted Canucks fan, I try to watch the Canucks live in my time zone whenever and wherever possible. I have been fortunate to have seen Canucks games live in five cities (Vancouver, San Jose, Toronto, Washington, and Buffalo) and I am planning to add the two New York teams to that list later this season. Last season I reported on my experience watching the Canucks play the Maple Leafs at the Air Canada Centre. This time around I am offering a look at my experience watching our boys in possibly my favourite NHL city that I have yet experienced: Buffalo.

Buffalo is an amazing hockey town, with rabid, knowledgeable and passionate fans. I have been to two games there now, and while I know I am obnoxious in my vocal support for the Canucks (despite sitting in the last row of the HSBC Arena both times) the fans do not get abusive in their responses. Rather, they heckle good-naturedly or simply get together and drown out my pro-Canucks cheer. When I cheer for the Canucks I am not abusive or derogatory toward the opposition or its fans, I am just passionate in my support of own team. Sabres fans are exactly the same in their responses and I have a ton of respect for them as a result.

After the jump: chanting matches with Sabres fans, hockey-themed beers, a Sabres fan who demanded and received satisfaction, Buffalo wings, (fake) Green Men, bubble hockey, and a loss on the scoreboard but a gigantic win on the enjoyment and entertainment scale.

I attended this game with my good friend and my brother (in picture above), so I was already excited for the company. My friend had never attended an NHL game and, despite being an Oilers fan, graciously supports the Canucks because he knows I care way too damn much about the fortunes of our historically beleaguered franchise. My brother is one of the main reasons I like hockey and the Canucks. I attended a number of games with him when I was young, but this was our first Canucks game together for at least 10 years. So yeah, needless to say I was extremely pumped for the evening. Not the greatest picture of us leading off this post, but the Buffalo faithful did not seem keen to take extra shots - so that was the best we got.

Now on with the photo diary. AND HERE WE GO: 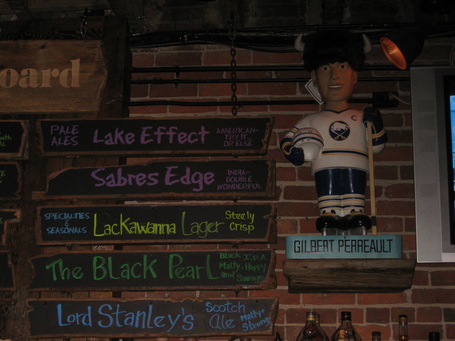 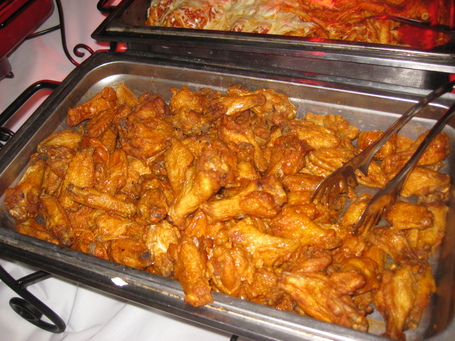 Our night started with the pregame buffet at the Pearl Street Bar and Grill. No, I am not on the payroll there - I just really enjoy the food and beer selection (I went there before seeing the Canucks play the Sabres in 2007), and it seems to be the pregame spot in Buffalo. We ate many delicious Buffalo wings and enjoyed some of the hockey themed beers available, which included Sabres Edge, Lord Stanley's Scotch Ale, and Don Cherry Cherry Wheat. Pretty sick beer names, eh? To top it off, the bar took Canadian cash at par - a nice gesture for the Canadians who travel down for games. 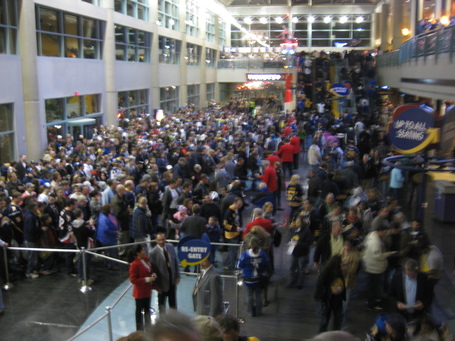 HSBC Arena has kind of a weird set-up when you arrive: you enter the concourse in a gigantic mass of people, and then kind of filter into lines before getting your ticket scanned. It is essentially organized chaos. My best guess is that no one wants to stand in line outside during a Buffalo winter, so they at least let people inside before herding them into the rink. Very different from GM Place though. 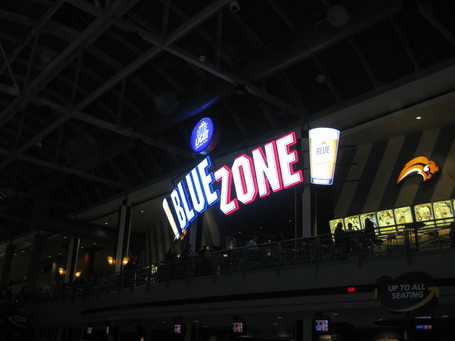 Canada and the USA both produce some excellent beers. Sadly, we seem only to export our worst beers to each other. Meaning that Blue is the go-to beer at HSBC Arena. 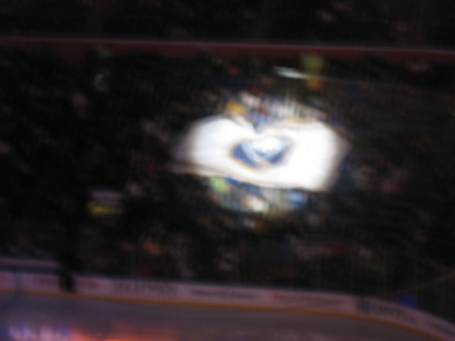 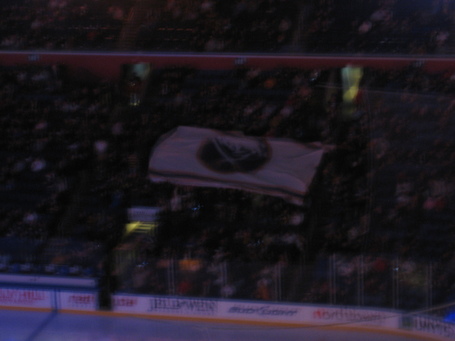 Unfortunately these pictures did not turn out so well, because this is a really cool pregame ritual: the passing around of a giant Sabres flag, which is lit up by a spotlight. It looks freakin' amazing from the upper bowl. 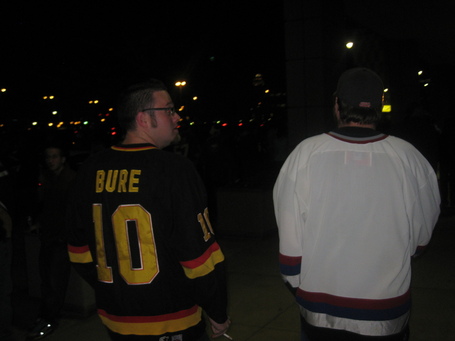 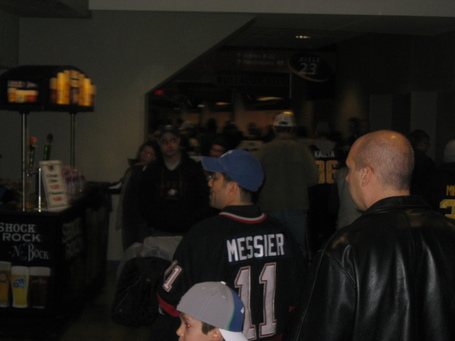 There were a decent scattering of Canucks fans throughout the building, but except for behind the benches there was no concentrated area in which we all sat. Last time I saw them in Buffalo there were way more Canucks fans, but sadly not on this night (maybe because it was a weekday). Saw the usual assortment of solid retro jerseys, though I don't support forcing anyone to remember that Mark Messier ever played for this franchise. 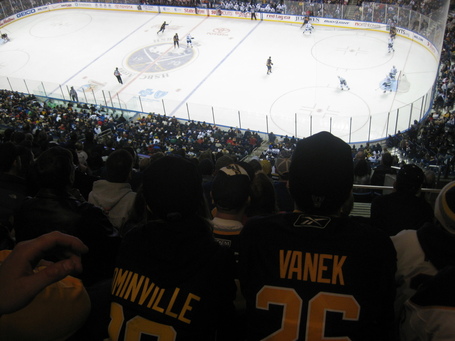 The view from the nosebleeds. Not too shabby actually!

My brother, my friend, and I regularly co-opted the standard chants (especially "Let's go Buffalo!") to be about the Canucks. The fans generally responded by rolling their eyes and yelling back and/or drowning us out. It was a lot of fun. We were surrounded by some very tolerant and good-natured fans. When the three of us shuffled seats after an intermission, the woman who was now sitting next to me said "Great, I have to sit next to you?" Also, after I had earlier announced that I was losing my voice from yelling so much but then later mustered a "Go Canucks Go" chant, a guy nearby sarcastically said "I thought you'd lost your voice." I love Sabres fans, I really, really do. I'm expecting a somewhat more hostile reaction from Rangers fans at MSG. 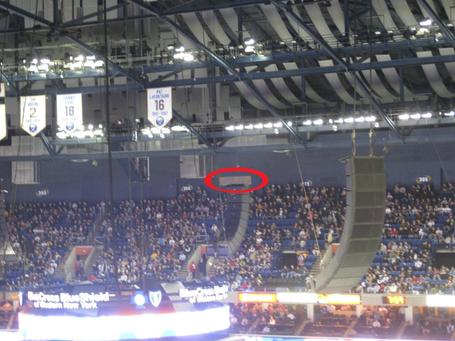 Remember that Sabres season ticket holder who hung a protest banner directed at the players, which read "FANS SHOW UP . . . WHY DON'T YOU?" She demanded satisfaction, and has gotten it with the Sabres recent inspired play. And to her credit, the fan recognized that the players responded by hanging a new banner. My camera sucked too much to get a clear shot, but it reads "THANK YOU FOR SHOWING UP!" Love that she expressed her frustration (and that the Sabres were not cowardly and let her do so) and then expressed her thanks to the team for turning it around. Awesome stuff. 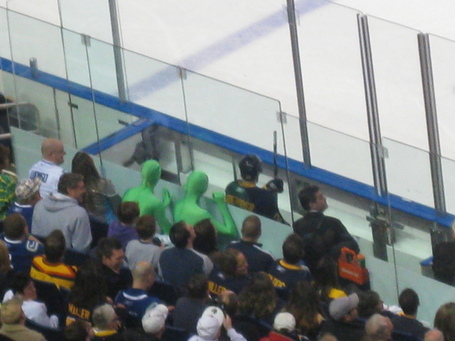 An unexpected "Green Men" sighting. I use quotation marks because, unless they were significantly off their game, these guys were clear not the real deal. What you see in this picture is about as animated as they got during the game. 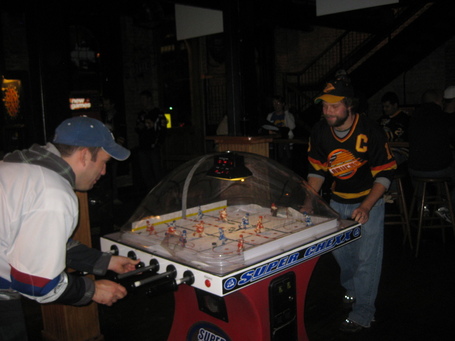 Of course, we returned to the Pearl Street Bar and Grill after the game. I met this gentleman, who in addition to having impeccable retro hockey style, is a Buffalo-raised Canucks fan. Why, you ask? Because, thanks to Buffalo's proximity to Canada, he grew up watching Hockey Night in Canada and started following Vancouver. Love it! He challenged me to a game of bubble-hockey, which he won in a hard fought contest. I took out the loss on my brother by beating him twice at bubble-hockey later in the evening, including this 1-0 nailbiter: 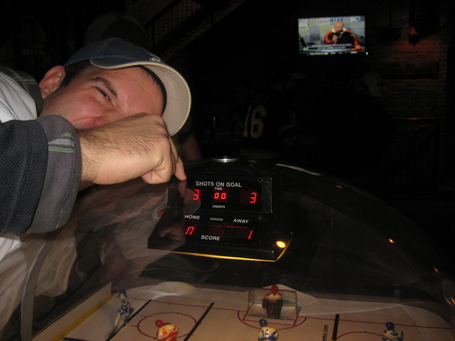 So, to conclude, it was a fantastic night with great company, good food and drink, and lots of excitement and randomness. Obviously it is a shame that the Canucks could not pull off the win - though people would NOT have been impressed with us had the Canucks pulled off the comeback! I'm glad they made a game of it, because it added a huge amount of passion to the game and to the experience of the evening. Can't wait to do it again some time soon!