Rise of the Daywalkers: Canucks & Sabres

Share All sharing options for: Rise of the Daywalkers: Canucks & Sabres 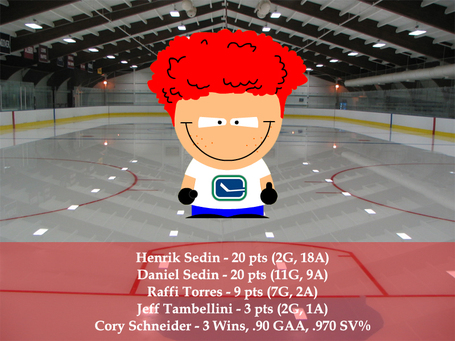 Enemy Blog: Die By The Blade

Enemy Con: Tyler Myers is over a foot taller than me; what a jerk. Also upstate NY is generally unpleasant and should be avoided at all costs.

What, you think Raffi Torres didn't have this game circled on his LA Kings Ice Girls calendar? You don't know your daywalkers then. Can Raymond build on his ToskLOL goal in TO and string some strong games together? Or how about a KesLORD hatty? Anyone else noticed how strong Hansen's play has been of late?

The defense always seems to play a bit tighter when the Ginger Jesus takes the crease. Speaking of which, if the Hoff really wants $5 million a season, this week would be a great time to show it, especially with the Penguins and Hawks waiting in the wings.

How about a win that doesn't involve a gut-wrenching first? Don't make Monday's suck worse than they already do.