...We Make This World Our Hell: Canucks & Devils

Share All sharing options for: ...We Make This World Our Hell: Canucks & Devils 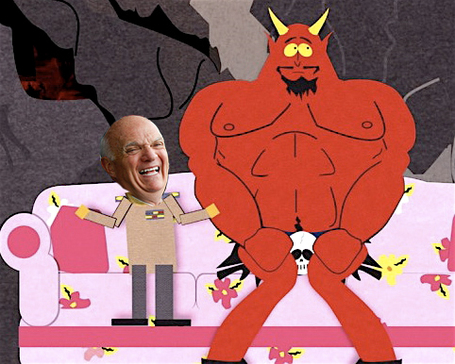 Enemy Blog: In Lou We Trust

It's heartwarming to welcome a team to British Columbia that has more issues than planning the Arrested Development movie (got to get that AD reference in!). The Canucks are getting healthier and are certainly well-rested having not played a game since LATE OCTOBER but, woah, what happened in New Jersey? No, not the Jersey Shore, those pricks are from Staten Island don't ya know?

Check out FTR's piece on the Devils; it's never good when you're curious how bad things will get...in November. The offense has disappeared, the defense is duct-taped together and their epic netminder is softer than Yanni looking at a rainbow and holding a basketful of puppies. Sounds familiar.

It's tempting to say this is an easy two points, but we've been down that dead end before and it usually ends with our bus plowing through the guardrail and right off a cliff. Vancouver looked complacent against the Avs; will they be rusty as all hell? Will Ballard be back and - with Hammer still sidelined - ready for top four minutes? Can the Kesler line pick up where it left off? Will Luongo build on his two previous strong games? Lastly, with the Devils in desperate need of a win, how will the Canucks respond?

Four games in six nights. For all their ups and down, we should have a better idea of who the Canucks are at the end of this stretch.