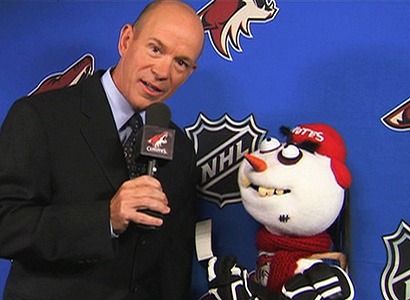 If you skip around the SBN hockey landscape today, you'll see many posts along the theme of "enhancing the fan experience". If you haven't, they're worth checking out as there are plenty of good ideas floating around. If you've noticed the backdrop here, then you know Samsung is involved (and the good news for you is a chance to win some gear, but more on that in a bit).

Now, with that disclaimer out of the way, I'd like to offer up a suggestion that I've been begging for season after season: the ability to mute broadcasters on your TV and listen instead to the natural sound of the game. This isn't just good for hockey, but most sports where inane chatter gets in the way of the entertainment value of the sport you're trying to watch.

Don't get me wrong, announcers aren't all bad. They're often necessary to help point out aspects we may have missed from the comfort of our couch. The color guys can explain facets of the shifts we mere mortal fans may not even know about. Lastly there's the up-sell factor: during breaks or returning from TV timeouts, then can sell and promote any number of goods and services which funds the broadcast we hold so dear. All well and good.

The problem is many of these duos detract from the game. The SBN hockey guys and gals recently had a long email thread about the best and worst announcers around the league. Guess what? 99.9% were deemed terrible, either suffering from blatant homerism (something we know plenty about with Jim Hughson and John Garrett around) to on-air battles with the English language (Peter McNab in Colorado or Doc Emrick in Jersey; the latter I like, who the hell else says a phrase like "the puck squirreled past the defenseman?"). In the worst cases they're just nonsensical and uninformed; unfortunately these folks (hello Eddie Olczyk) get promoted to national broadcasts down here in the flat 48.

Every sport has this problem and some great blogs are around to chronicle it. In fact one of the most popular posts on Deadspin right now: how to bypass listening to the announcers during the World Series. Can't say I blame them; neither can these folks probably.

Every once and awhile, technical difficulties briefly force TV crews to actually broadcast a game with only natural sound. It's the definition of refreshing, even if it's just for a few precious minutes.

So how great would a natural sound option on your TV be for an entire game? Just as you can flip your audio feed to Spanish or turn on the closed caption function, you opt out of the broadcasters and instead just hear the game as if you're a ticket holder. All those parabolic mics around the ice capturing the blades on the rink, they guys calling for the puck, stick taps and deflections, the roar of the crowd, the boos during a penalty, Alain Vigneault burst a blood vessel over Mikael Samuelsson, everything! With no competing voices you could even have a discussion with someone in the room. If not just sit back and immerse yourself in the game as if you're there on the bench with the players (ok, maybe that's too close).

Networks could even run advertising crawls across the bottom if they need the on-air promotional coin. I would gladly take that over listening to the Wild announcers touch themselves every time the Wild successfully complete a pass.

Besides what better way to get fans off the couch and pay for a seat other than to remind them just how special it is being at a live game?

Update: Glove tap voline for passing this comment along from the Puck Daddy post which linked here this morning (mucho gracias Wysh!)

announcer-less nhl broadcasts, i do that every year for the winter classic and other games on nbc, if you’ve got your audio going through a sound system just mute the center channel speaker and you’re good to go