On the internet no one can hear you scream: horror movie Canucks

Share All sharing options for: On the internet no one can hear you scream: horror movie Canucks

I've never seen an entire Disney movie in my life, but I remember walking by the video store's horror movie section as a kid and begging my dad to rent the one with the bloodiest cover. Maybe it's because he was an Army guy, maybe it's because I was the youngest of three and he stopped caring after two, or maybe he just thought it was funny letting a giggling 8-year-old walk up to the register with a copy of The Exorcist, but he let it happen.

Just like that, Jason and Freddy became the Bambi and Mickey of my youth. That probably explains a thing or two.

Since we have a long break between games, Halloween is this weekend and I have too much time on my hands, I thought I'd match up some lads on the Canucks roster with their most comparable horror villain counterpart. Sorry if it's too horror movie fanboy-ish for some, blame the NHL schedule makers.

I've never been more scared of Cory Schneider in my life. 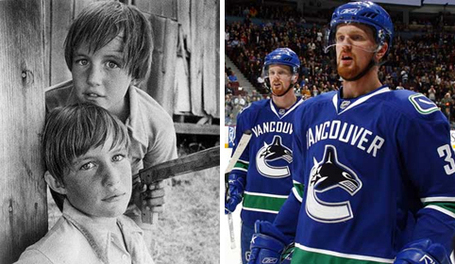 Villain: Niles and Holland Perry, The Other

Why?: A bit of an older diddy, but it's not easy finding exact twins in horror movies either. This flick involves identical twin boys who are taught by a wicked grandmother (aren't they always?) a psychic power she called "the great game" which allows them to project themselves out of their body. These rapscallions used it for murder, the Sedins used their great game for sickness like this. Perhaps one day they'll use it for evil...hold up...why am I suddenly being stabbed in the crotch with a spork? 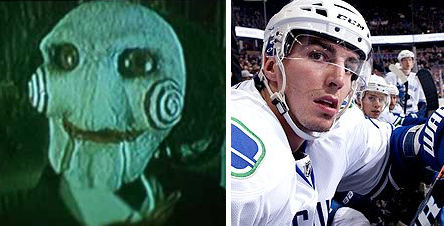 Why?: Both are pragmatic and uniquely dedicated, Jigsaw going from a run-of-the-mill husband to psychopathic murderer & Burrows going from a run-of-the-mill un-drafted ball hockey player all the way up to the third Sedin. Both are big on explaining the rules of the game to those who aren't living life to the fullest. Both are known to use psychological techniques to attack their victims. Also...tricycles. 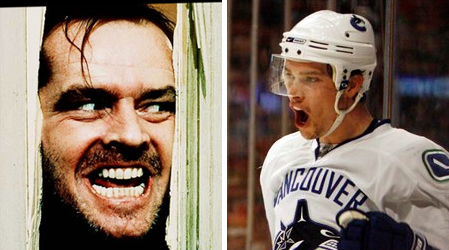 Why?: It's only a matter of time before the constant sitcom barbs (How I Met Your Mother & Everyone Loves Raymond chiefly) drive him off the edge where he embraces alcoholism, talks to ghosts in hotels on the road and finally splits down Vigneault's door demanding more ice time. As an avid hunter, don't think Raymond ain't handy with an axe. Heeeeeeeeeere's Mayray! 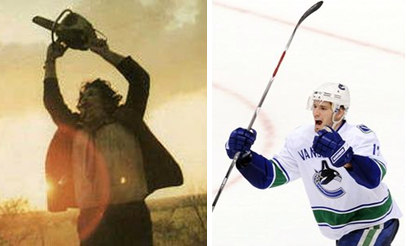 Why?: A pair of misunderstood gentleman who scare the hell out of everyone who isn't on their team. We're not supposed to understand why Leatherface rips through innocent bystanders with his mechanical toy and wears their skin as a mask; so stop asking why Kesler hates Canada, the refs, David Backes, Andrew Ladd and everyone in Chicago, ok? Just step off, mind your business and for God's sake never drive through rural Texas.

Villain: The Clown from Poltergeist

Why?: This Parenting Blog (wait, what?) tells all you need to know why the Poltergeist clown is scary as hell: he doesn't talk, he keeps showing up in different places and - oh yeah - he's a friggin' clown. Torres doesn't mouth off much, he's on his fourth team in three years and certainly isn't above looking like a clown. Would you want either of them sleeping at the foot of your kid's bed?? Now THAT is bad parenting, something the blog post curiously doesn't reference. 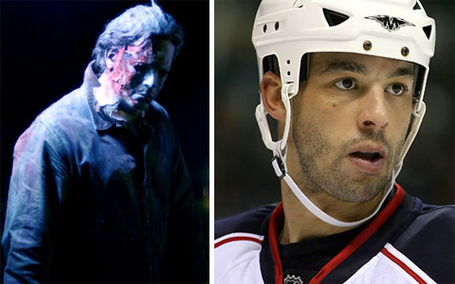 Why?: Part of the horror of Michael Myers is you don't know who the hell he is: is he human, a monster, an alien or a potpourri of supernatural baddies? No idea. Similarly who the hell is this Manny fellow? Is he a first liner or third liner? Faceoff machine or Bobby Orr? Ruthless pugilist or down-to-earth nice guy? Killing penalties or going to the highlight reel? Did I mention he's good with a knife and there's no game on Halloween this year? Never underestimate the underlying sadistic nature of name alliteration. 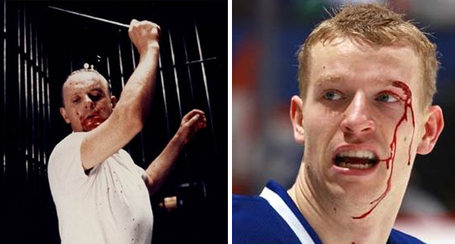 Villain: Hannibal Lecter, The Silence of the Lambs

Why?: Both share European backgrounds and have sleek frames with "wiry strength". Canucks.com dubs Jank "the silent killer" which is definitely Lecter-style (though not sure is Hansen has graduated to craniotomies yet). Remember what I said about name alliteration? Hannibal Hansen is pretty bad ass. 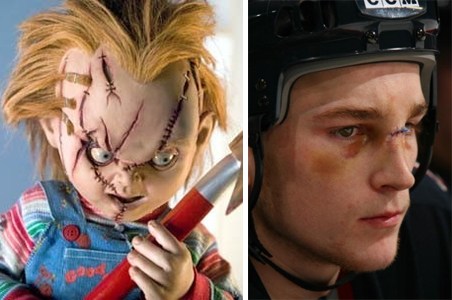 Why?: Rypien is the shortest Canuck, Chucky is the shortest villain (I'm not counting Leprechaun, that's just silly). Both are vilified for assaulting "children" while guests in their "homes." At least Chucky's kid didn't lawyer up, he just threw the doll in the fireplace before it was shot in the head. Wuss. 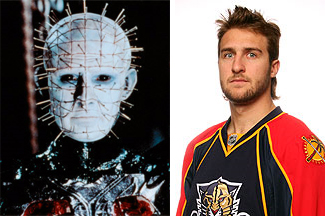 Why?: Pinhead's a tough guy to understand (as are the Hellraiser movies honestly), so thanks to Wikipedia we know Clive Barker wanted his baddie to have "penetrating intelligence" and also be "highly resistant to damage and direct assault." As a Darthmouth alum, Glass can use his smarts for nefarious purposes and earns his hard earned by absorbing the blows and abuse from other fourth liners, all of whom are pinheads from time to time. We don't know if Glass has a Butterball-type friend, so we'll drop the obvious Wellwood barb...right...here. 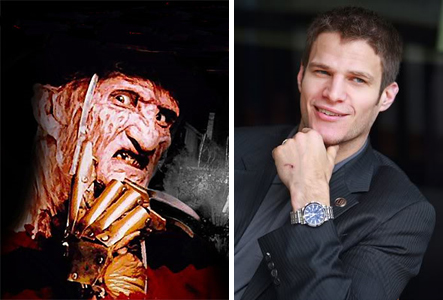 Why?: Bieksa frequently causes terrible anxiety and abject misery when you're awake, leading to restless nights and possible nightmare-induced deaths including ramming your head through your TV. 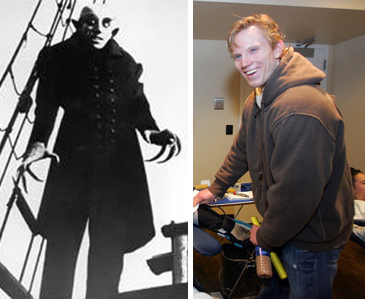 Why?: All you need to know is they're both German creatures of the night. Look, I don't know if Ehrhoff drinks blood or sleeps in a coffin - hell I don't even know if he's ever been outside in the sun - but until I'm convinced otherwise, he's a vampire. He clearly shares that Euro-vibe with the kids from Twilight. That pic above? He's taking BLOOD from an innocent animal. You've been warned. 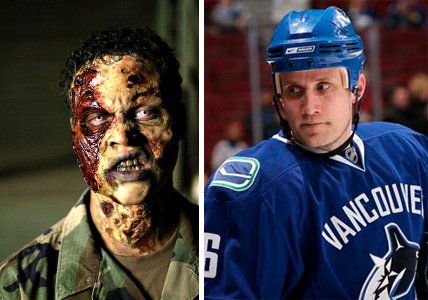 Villain: Any Zombie movie ever produced. Thriller too.

Why?: If ever there was a reason to explain his frail frame yet uncompromising drive, it's this: he's the undead and wants to eat your brain. Or something. 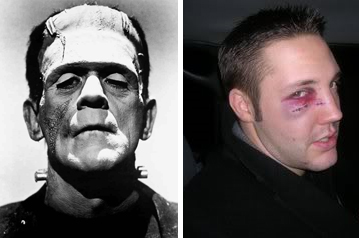 Why?: I present this with no supporting explanation. 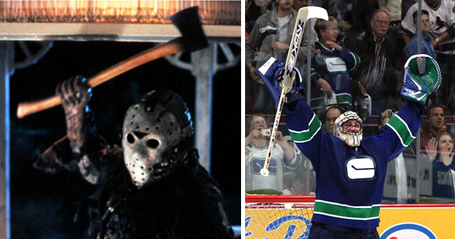 Why?: If you view the entire horror series and Luongo's tenure in Vancouver in parallel, they both get off to rocky starts (spoiler alert: Jason ain't Jason in the first film) but hit their strides as time passes before comically imploding towards the end. If you view the average Friday the 13th alongside the average Luongo year, it's the same story: the guy is unstoppable and we're left wondering how those teenagers can stop him until, opps, they do. It's worth mentioning neither Jason or Luongo lasted long in New York either; fun fact on that movie is that it was shot in Vancouver. And here you thought I was just going to say the hockey mask. 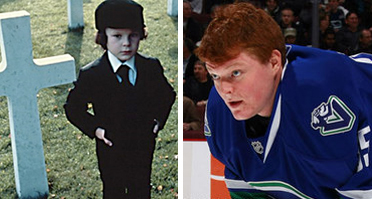 Why?: Damien is the innocent child that no one suspects is the devil, quietly turning everything around him into a vessel of evil until all his enemies are eliminated and he alone is in power. Cory? In just three weeks as a full-fledged member of the Canucks, most of the new guys are injured, the team is struggling, his mentor is being doubted, a new chapter of fan assault has been published, all of which leaves Schneider as the brightest spot on the roster early on. What's that smell? Ah yes, I've soiled myself. 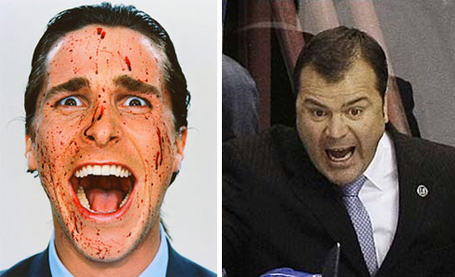 Why?: Both are overtly narcissistic and willing to kill anyone if they are made to feel inadequate or appear incorrect in a public or private setting. Capable of making you laugh one second and send a chill up your spine with an icy stare the next. Obsessive compulsive. Fashion-inclined. Generally speaking they're both psychotic.

Why?: She's the hot girl cast adrift in a male-centric world of immense brutality, blood and unfathomable gore. Also you never turn down a reason to show a picture of Kristen. Never.