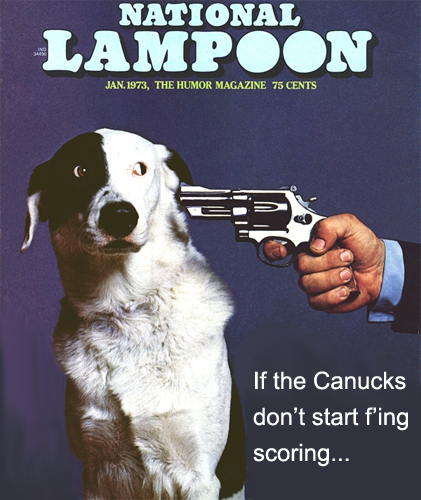 Enemy Con: Jello salad is not food, it's an insult to humanity.

In one corner, the plucky upstart ginger Jesus whose patience and professionalism - coupled with a slow October for the $10 million dolla' man - is allowing him to cash in on our love and affection.

In the other corner, the Wild's version of Andrew Raycroft: a pride-shattered former bluechipper - who had his Vezina taken back after he was laughed out of a Canadian market only to wash ashore on the golden beaches of Denver...where he also failed - now relegated to back-up duties in a Cup-starved market.

The Phenom Vs The Propecia!

A Daywalker Vs. A Doggybag!

(See? For a split second you forgot the whole Rypien ordeal, losing streak, injuries, lack of secondary scoring and that fire in your kitchen.)

Since we're dealing with Minnesota for the second time this week...

Cousin Vicki: I'm going steady, and I French kiss.
Audrey Griswold: So? Everybody does that.
Cousin Vicki: Yeah, but Daddy says I'm the best at it.